Welcome to the 2020 Project Spurs Draft Prospects Board. After viewing the board, you can read below why each prospect was chosen and how to use the board.

How were the prospects selected?

The prospects on this board are listed above due to three reasons:

How do I use the draft board?

From left to right, the player is identified by name, height, followed by the school or professional team he just finished playing for, and then where the player is expected to get drafted on different mock drafts. Finally, the average selection place of the mocks drafts is listed, and that’s how the players are listed in order. 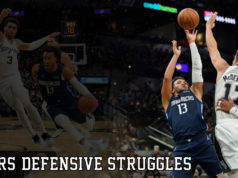 Are the Spurs’ Early Season Defensive Struggles a Fluke?