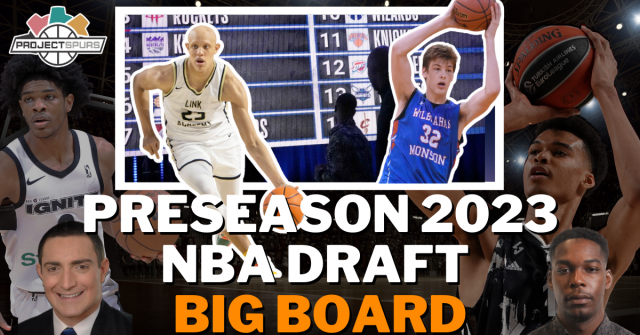 The college basketball season is upon us as games get going on Monday, November 7th. That makes this the perfect time to get you ready with a couple of 2023 NBA Draft big boards. While I’ve previously written pieces on top prospects for schools like Duke and  Arkansas, they hardly paint the picture of the entire class. This should help everyone look out for specific players throughout the college basketball season.

Below you’ll find the 2023 NBA Draft Big Boards for Ben (me) and my Project Spurs colleague Evan Townsend. These are complete two-round boards of 60 names, one for each pick in the draft. The projections are side-by-side separated by round so you can see where we differ. Below, we’ll highlight some of the bigger names we are high on and why.

Evan has been effusive in his praise for Arkansas wing Jordan Walsh. Walsh has generally been mocked as a guy just outside the lottery, but Evan has other ideas. Here is what he has to say about the 6-foot-7, 205-pound freshman.

“[I saw] Jordan Walsh in person and witness[ed] his will to stay on a court with the second and third units, switching onto multiple positions all while guarding the longhorns’ best-opposing wings on the floor. he’s a lottery pick in my opinion and has an NBA-ready frame today.”

Evan might seem a little low on Matthew Cleveland as a second-rounder, but Evan also thinks he could jump up quite depending on how he plays at Florida State this season. The 6-foot-7, 200-pound sophomore could be special.

“Matthew Cleveland has a chance of being THE GUY now at Florida State, but is he ready for that role? Will he shoot himself out of the first round? Sill he shows any improvements to his outside game? I honestly don’t think so. He’s a second-rounder for now. Definitely could find his way in the back of an NBA rotation one day.”

Now that you’ve gotten inside the mind of Evan, you can compare it to my big board.

Oregon’s Kel’el Ware is a bit high right now and that is based solely on his potential. He will have to show that he can be consistent and can be more than a dunker and lob target. The debate between him and Dereck Lively II is basically a high ceiling/low floor (Ware) and low ceiling/high floor (Lively) discussion that happens often between big men like these two.

Florida State’s Baba Miller might be a bit low, but with his suspension lasting 16 games (nearly half a season) he will have to show a lot of what he can do in a little bit of time. He will have to get chemistry with his teammates in real games, and in conference play to boot. His potential is intriguing and what had him as a first-rounder before the NCAA decided cut his season short.

Guessing he ends up being a 7 footer w/ shoes on pic.twitter.com/DK7b9YgPZf

Duke’s Kyle Filipowski is an intriguing prospect as he has some great offensive tools and could even have an offense run through him. This season, he will have to show he can move his feet and play some defense if he wants to move up into the first round. As of now, he sits squarely in the second round.

Soon to be 5 ⭐️ recruit after a breakout summer, Filipowski is one of the most offensively gifted players in his class.

Flashes guard skills on the perimeter at 6’11, stretches the floor, plays a complete inside-out game.pic.twitter.com/F7ycGdux5f

What Do You Think?

Are we buying in on any players too much? Is there someone that didn’t make the boards that are flying under the radar? Let us know in the comments below.