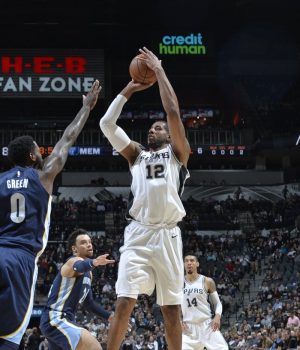 SAN ANTONIO – LaMarcus Aldridge delivered his best performance in a San Antonio Spurs uniform as he led his team to a 104-95 victory over the Memphis Grizzlies (7-13) at the AT&T Center on Wednesday night.

The victory was the third straight for the Spurs, winners of five of their last six contests. Tony Parker continued to play well in just his second game of the season, scoring 10 points in 17 minutes of action.

Here is what went good and bad for the Spurs, as well as three standout players: LaMarcus Aldridge, Pau Gasol, and Kyle Anderson.

LaMarcus Aldridge: Following his best performance in a Spurs uniform, picking LaMarcus Aldridge as a standout player was a no brainer. Aldridge finished with a season-high 41 points on 71 percent shooting, six rebounds, and one block. The only other time Aldridge scored 40+ in a game with San Antonio was Game 2 of the the 2016 Western Conference Semifinals series against the Oklahoma City Thunder, where he also had 41 points.

Aldridge’s play continues to be the highlight of the season for the San Antonio coaches and fans. There is no reason to think the NBA All-Star forward will defer when Kawhi Leonard returns from injury, likely making the duo one of the bigger threats in the Western Conference.

The bigger side was that he did it at all ends of the floor. On the defensive side, he and Pau Gasol held Marc Gasol below his scoring average and held down the fort as the Spurs out-rebounded Memphis 32-26.

With Aldridge playing at such a high level, keeping the Silver and Black in the top three in the West, San Antonio could make a push for a top two seed when Leonard returns and gets back into the fold.

Pau Gasol: Despite scoring just four points on 2-of-6 shooting, Pau Gasol is the second standout player. The reason? His defensive effort in stopping his NBA All-Star brother.

Gasol and Aldridge combined for 12 rebounds in the game. Pau and LaMarcus’ defense efforts held Marc Gasol to just 10 points and 6 rebounds, below his season average of 19.1 points per game. While Pau made not be the shooter he was once, he showed he can still crank it up on the defensive end of the floor. And that above all is why Coach Pop shows such great respect for the NBA veteran center.

Kyle Anderson: The former UCLA Bruin continues to have a solid season as he fills in for the on the mend Kawhi Leonard. Anderson finished with 10 points, four rebounds, four steals, and two assists on Wednesday.

Anderson’s play has caught Pop’s attention, who praised him before the game. When the Spurs are fully healthy, teams will focus their attention to Aldridge and Leonard. That will leave players like Anderson to make key plays for the Spurs. There is no doubt that Leonard’s injury has a silver lining and Kyle Anderson may just be the silver lining.

Pop said in the playoffs last year Kyle Anderson started to blossom for San Antonio and it’s carried over into this season.

Up next: The Spurs are now 14-7 on the season and will now hit the road for their next two games. Stop number one is in Memphis on Friday night when they play the Grizzlies to close out their home-and-home set.