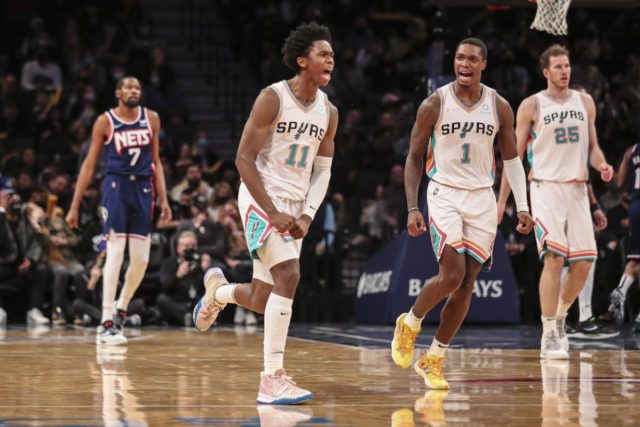 With the NBA Draft approaching next Thursday (June 23) and then free agency following shortly after on June 30, it’s time to look at the San Antonio Spurs’ roster heading into the offseason.

Heading into the NBA Draft, the Spurs will have four picks, with three picks in the first round and one in the second round.

One scenario to watch is whether the Spurs make any trades involving any of these picks. The Spurs already have 8 players under guaranteed contracts for next season, and when you account for the three first round picks, that’s already 11 players on the roster. 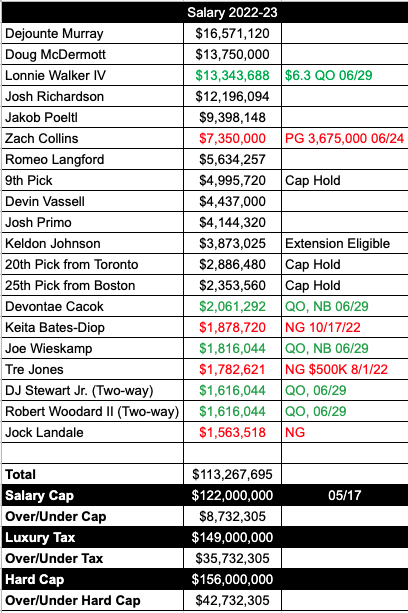 While teams can carry up to 20 players on their roster in the offseason, by opening night, the roster has to be trimmed to 15 players and 2 two-way players.

Because first round picks have cap holds, those three slots are already added to the Spurs’ roster. So again, 11 players on the roster, and the Spurs still need to make decisions on four players who don’t have fully guaranteed contracts (Zach Collins, Keita Bates-Diop, Tre Jones, Jock Landale).

That’s 14 players now on the roster when you add the players  who don’t have guaranteed deals. Now throw in the fact that the Spurs will have 5 players entering free agency.

So with a roster that’s already almost full before free agency begins, will the Spurs move some of those first round picks, whether that be moving up or down in the draft, or trading for a future pick?

The Spurs have until June 29 to tender the following players qualifying offers so the players enter free agency June 30 as restricted free agents.

As long as Walker IV doesn’t sign an offer sheet, there’s also the possibility of the Spurs, Walker IV, and Team X to come to an agreement on a sign-and-trade agreement. This would only be the case if the Spurs knew Walker IV wanted to leave San Antonio and they had no intention of matching a proposed offer sheet. This would give the Spurs the opportunity to help Walker IV land with his new team while also trying to get back some assets from that team.

If a player doesn’t sign an offer sheet, but he also doesn’t want to re-sign in San Antonio, then he can accept the qualifying offer for next season, play out the season, and then next summer he’ll be an unrestricted free agent.

At 5 PM CT, NBA free agency negotiations begin, which means teams can start communicating with their own free agents or other free agents.

The Spurs will be one of the few teams with the ability to open significant cap space this summer. Depending on what the Spurs decide to do with their free agents and players on non-guaranteed contracts, they will be able to open anywhere from $15.8 million to $37 million in cap space.

Operating as a team with cap space will also give the Spurs the ability to use the room exception worth $5.3 million once they use the cap space. The room exception can be used to sign one free agent, or split to sign two players.

According to Bobby Marks of ESPN, as long as Jones is on the roster still by August 1, his contract will partially guarantee for $500,000.

The Spurs will have from July 1 to the day before the regular season begins in October to extend Keldon Johnson’s contract.

Murray’s extension was for 4 years, for a total of $64 million. He hadn’t made an All-Star team by that point, but he had made the All-NBA defensive second team in a previous season. White was signed to a 4-year extension for $70 million per spotrac.com.

If the Spurs don’t extend Johnson’s contract this offseason, then he’ll be a restricted free agent next summer.