As recently written in the San Antonio Spurs offseason primer, the Spurs can make themselves one of the few teams with the ability to open significant cap space this offseason. San Antonio can open anywhere from $15.8 million to $37 million in cap space depending on decisions with free agents and players on non-guaranteed deals.

You can read about Zach LaVine and Deandre Ayton as well.

Figuring out what type of deal to offer Sexton is a bit tricky for two reasons: 1) he’s a restricted free agent and 2) he’s coming off a knee injury where he was only able to play in 11 games last season before getting hurt.

According to early June reporting from Chris Fedor of Cleveland.com, his sources say Sexton’s representatives are looking for a deal in the $20 million per season range.

Do the Spurs have interest in Sexton?

Per Fedor in the referenced article above, his sources say the Spurs “have some Sexton fans in their front office.”

If the Spurs do have interest in Sexton, they would have the cap flexibility to be able to send an offer sheet to Sexton without having to make trades.

Regarding Sexton’s knee injury, he had surgery on the knee back in mid November. Per Rotowire.com, his estimated return date to the court is in October.

Keep in mind as you’re analyzing this data that it was from a year ago and we don’t know yet if Sexton will be able to return to the same level once he heals from his injury, or how long it’ll take him to get back to the level he was at before the injury. 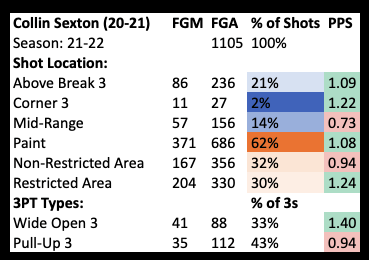 Sexton mainly sought to attack the paint when he took shot attempts, with 62% of his attempts coming from the paint. When he got into the paint, 32% of his shots were from the floater range and 30% of his shots were close to the rim. After the paint, 23% of his attempts came from three, where he shot efficiently on above-the-break looks, corners, and when he was left wide open. 43% of his 3s were pull-up 3s, where he wasn’t able to get over a point per shot on those attempts that season.

In the 20-21 season, Sexton led the Cavs in drives per game with 16.8 per game. He would give Dejounte Murray a backcourt partner who can help attack the paint, after Murray led the Spurs with 17.9 drives per game this past season and no other Spur had over 10 drives per game once Derrick White was traded in February.

He would help the Spurs in having another guard who can get to the free throw line, but he would need to work on not turning the ball over when driving the ball.

Sexton had a 29.6% usage rate during the 20-21 season, which was in the 93rd percentile among combo guards per CleaningTheGlass.com (CTG). This would mean the Spurs would see a bit of a shift in their offense since Murray had a usage rate last season of 31.5%, and no other Spur had a usage rate at or above 24% last season.

The Cavs scored +1.6 points per 100 possessions when Sexton was on the floor per CTG during the 20-21 season.

When looking at Sexton’s per 36 numbers on defense from the 20-21 season compared to rotation Spurs guards and wings from last season, not one metric really stands out. Most of the metrics would be toward the bottom among the group of players.

Sexton was above league average for his position in foul percentage per CTG. Opponents scored +2.3 points per 100 possessions when Sexton was on the floor during the 20-21 season according to CTG. With Sexton, the Spurs would be adding another 6’1″ guard to their backcourt.

Stats used were from NBA.com/stats and CleaningTheGlass.com.