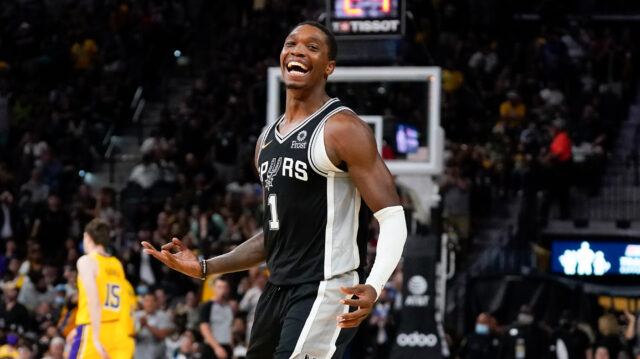 Free agency negotiations officially began Thursday at 5 PM CT, and while the San Antonio Spurs didn’t agree to terms with any free agents in the opening hours, they still had a busy day.

Here are the topics you can scroll down to and read below:

The Spurs and Atlanta Hawks were able to complete the trade for Murray earlier than the expected July 6 date because the Spurs included Jock Landale in the deal. By including Landale as part of the deal, both teams could still complete the deal under the 2021-2022 season before it flipped to 2022-2023 at 5 PM CT.

The Spurs ended up acquiring Gallinari, three future first round picks and a future pick swap as previously reported. We’re still waiting to find out how much partial guaranteed money Gallinari will now get, but we do know his guarantee date was pushed back to July 8 according to reporting from Bleacher Report.

Lonnie Walker IV is Headed to the Lakers

Just before free agency began, the Spurs pulled Walker IV’s $6.3 million qualifying offer to make him an urestricted free agent. In the opening hours of free agency, Walker IV agreed to terms with the Los Angeles Lakers on a one year deal, for $6.5 million, meaning he was able to get the Lakers’ tax mid-level exception worth $6.5 million.

Spurs General Manager Brian Wright said a key reason why the Spurs moved on from Walker IV was because of how the draft played out in San Antonio selecting two guards with three of their first round picks.

“A player that’s been here for a while and we’ve seen his growth and we’re excited for what’s to come for him,” said Wright Thursday. “I think the way the draft played out kind of changed the trajectory of our roster and made the opportunities a little bit different than maybe they would have been had the draft gone a different away. We did decide to pull the qualifying offer, but again, he’s going to be a player that continues to grow and we’re excited to follow his development wherever that lands.”

A few hours after the trade was completed with the Hawks, Wright held a press conference with the local media. He said the Spurs didn’t go into this offseason with the intention of wanting to trade Murray, but as the organization explored their options and their timeline, they felt they couldn’t say no to the trade offer from Atlanta with all the future picks.

He said during trade negotiations, he was being transparent with Murray and his agent. Wright said seeing Murray grow and develop with the Spurs from his first year being drafted to becoming an All-Star last season made it the most difficult decision he’s had to make in his job.

As for how the team was going to approach free agency, here’s what Wright said.

“Obviously there’s a new wrinkle with your starting point guard being gone so I think we’ll just take a look and see what’s there not just in signing people, but just in general. We’ll approach it and be methodical and patient like we try to be historically and just see how we can kind of put the pieces together for now, but also into the future.”

How much cap space do the Spurs have and what are they going to do with it?

The Spurs can open anywhere from $20.4 million to $39.6 million in cap space. Assuming Gallinari’s partial guarantee is in the $12 million range and then he gets waived (as has been reported), the Spurs could get to that $39.6 million number by renouncing all their free agents and waiving Tre Jones and Keita Bates-Diop.

With Kevin Durant announcing he wants a trade from Brooklyn, the Spurs are in the perfect position to use their cap space to take on contracts for future draft picks if teams that want to chase Durant or Kyrie Irving need to open cap space or get more room under the hard cap.

Where does the roster stand?

The Spurs have 11 players on guaranteed contracts and 3 players on non-guaranteed deals in Gallinari, Bates-Diop, and Tre Jones. Assuming Gallinari will be waived, they have a roster with 13 spots filled. The team still has Joe Wieskamp out in restricted free agency.

Here’s what the projected depth chart looks like at the moment without Gallinari:

Pop had the perfect quote about Brown being back in San Antonio:

“I’m thrilled to be able to hire such a good coach, human being and dinner partner,” said Popovich.