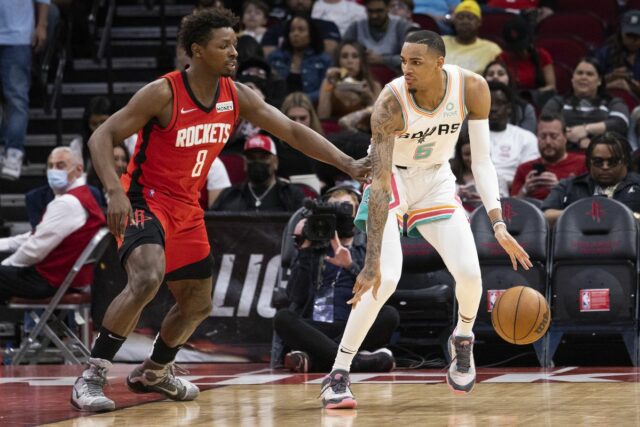 After days of speculation and rumors, the San Antonio Spurs have agreed to trade All-Star Dejounte Murray to the Atlanta Hawks for Danilo Gallinari, three future first round picks, and a future pick swap.

According to multiple reporters, the Hawks are sending a 2023 first round pick via the Charlotte Hornets, and unprotected 2025 and 2027 first round picks. The Spurs’ pick swap will be on the 2026 pick. The 2023 pick from the Hornets is protected in the ranges of 17-30 per Real GM.

Why did the Spurs trade Murray?

By trading Murray for Gallinari (who will probably be traded or waived) and future assets, this is a clear sign the Spurs are continuing the rebuild. Signs of a rebuild were apparent by last week’s draft, when instead of trading 1 or 2 of their first round picks, the Spurs drafted three rookies in Jeremy Sochan, Malaki Branham, and Blake Wesley.

Though Murray was an All-Star and still had two years left on his deal, the Spurs would have had a decision to make in two years from now, when Murray would have been an unrestricted free agent and could command a maximum salary close to $40 million per season.

According to Mike Finger of the San Antonio Express News, San Antonio Spurs Head Coach Gregg Popovich was in agreement with the move.

Can report that Gregg Popovich gave his official blessing to the Murray trade and — while nothing is guaranteed, obviously — he’s completely on board with coaching a bunch of kids next season.

As a team source just told me, he’s excited, “like he’s back at Pomona-Pitzer.”

Where do the Spurs stand financially after the trade?

Since the Spurs tendered qualifying offers to Lonnie Walker IV and Joe Wieskamp, they’ll begin Thursday with $10.8 million in cap space. They can open up to $31.1 million in cap space if Galinari’s deal guarantees at $21.4 million and they withdraw the qualifying offers for Walker IV and Wieskamp, plus waive Tre Jones, Keita Bates-Diop, and Jock Landale.

If the Spurs use their cap space, it’ll likely be to take on contracts from teams wanting to open cap room in return for more future draft picks.

Veteran players to watch in trade rumors now will be Jakob Poeltl, Doug McDermott, and Josh Richardson, in the event the Spurs want to go even further toward the rebuilding movement. If the Spurs only have to pay Galinari his partial guaranteed salary, they’ll likely waive him before the $21.4 million salary guarantees. If his $21.4 million salary guarantees, he could also be a player the Spurs try to trade or just end up waiving.