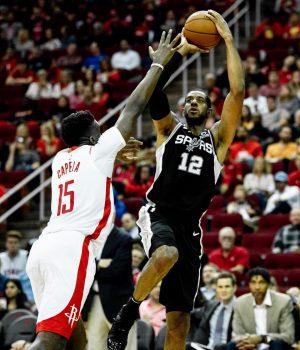 The San Antonio Spurs defeated the Houston Rockets 128-114 at the Toyota Center on Wednesday night in their penultimate preseason game.

Both Rudy Gay and DeMar DeRozan both rested and did not play as Trey Lyles and Lonnie Walker IV got the start in their places.

In case you missed it, here are three thoughts following the Spurs’ win over the Rockets.

The Spurs will already be better from a season ago when they tip off the season next week simply by having Dejounte Murray back in the lineup. The 23-year-old guard has been showing bursts of his old self but had his best performance on Wednesday night.

Murray finished with 20 points, shot 73 percent from the floor, and dished out four assists. He showed off his improved midrange jumper, continues to be consistent from three-point range, and used his speed in transition.

If Murray can keep up this high level of production paired with DeRozan and Aldridge, San Antonio can really surprise a lot of people this season.

The preseason has not been kind to Derrick White, who had a standout summer as a member of Team USA. White has struggled with his shot in the preseason but had his best game on Tuesday night. He finished with 13 points, five rebounds, and three assists in 20 minutes of work.

Walker had a nice night at the office and did most of his damage on the defensive end. He shot just 25 percent but had four assists and four rebounds. Defensively, he played well as he fought over screens and guarded Russell Westbrook, and had a nice block on a James Harden shot.

If Walker and White can play well together consistently, the Spurs should have a really good year.

The biggest issue with the Spurs is still their defense. In the last three games, San Antonio has given up 114.6 points per game, which will likely not please Coach Pop. The Spurs will need to have all hands on deck when the season starts because as we all know, defense wins championships.

The Spurs will close out the preseason on Friday night at the AT&T Center against the Memphis Grizzles.