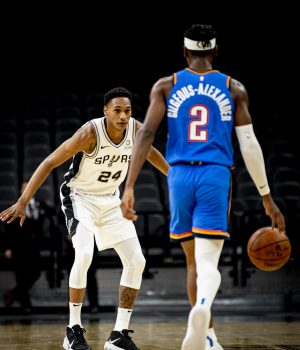 The San Antonio Spurs fell to the Oklahoma City Thunder Saturday in their preseason opener 121-108. Out for the Spurs due to injury were Derrick White, Keldon Johnson, and Quinndary Weatherspoon. Here are some topics we’ll be exploring in this weekend wrap-up of the first preseason game.

The improved defense the Spurs played in the bubble back in August wasn’t the defense that showed up for the first half Saturday. The Spurs allowed 33 points to the Thunder in the first quarter, then the Thunder outscored the Spurs 40-26 in the second quarter, taking a 15 point lead into halftime.

“I thought the first half was worse than a regular preseason game,” said Spurs Head Coach Gregg Popovich after the game. “They scored 1,000 points in the first half.”

“Just getting back into it,” said Rudy Gay of the reason for the slow start in the first half. “Just a little rusty, getting back to the basics.”

The Spurs started with a traditional lineup rather than the small ball they were playing in the bubble. They began with Dejounte Murray, DeMar DeRozan, Rudy Gay (who usually plays the 4), LaMarcus Aldridge, and Jakob Poeltl.

With more traditional halfcourt players on the floor, the Spurs didn’t push the pace like they had been saying in training camp they were going to do this season. Instead, there were more halfcourt sets on offense and in the first half, the Thunder made 70% of their attempts in the paint and 60% of their outside shots.

The Spurs went with a bench unit of Patty Mills, Lonnie Walker IV, Devin Vassell, Trey Lyles, and Keita Bates-Diop for the second half.

Walker IV didn’t play in the second half, after logging just 13 minutes in the first half. He has been recovering from a back injury over the last two weeks and was a late decision to play. Bates-Diop sprained his left ankle in the first half and didn’t return to the game.

Right from the get-go in the first quarter, Vassell attacked the rim off a catch in the halfcourt and got himself to the free throw line.

He picked up three early fouls in the first half, but then in the second half he didn’t tally any fouls.

On defense, he collected three steals, one by anticipating a post entry pass and another when seeing a cutter though the middle, he dashed in to break up the pass.

“You’ve just kind of got to see it,” said Vassell of picking off passes on defense. “It’s kind of like a gamble.”

He recorded a block on help defense on a drive and on offense, he knocked down 4 free throws, he made two spot-up 3-pointers, and he made a pull-up jumper after a pump fake.

“He did a fine job,” said Popovich of Vassell. “He’s competitive, he plays the game wisely.”

Vassell said he wants to “get minutes and get stops. However I can get on the court, that’s what I’m going to do.”

He said the coaches have told him to “kind of just be myself. Play my game, at the end of the day, just be confident in myself and play defense.”

“He’s tough,” said Gay of Vassell after the game. “He’s smart and has heart.”

“I think they can compliment each other,” said Gay of the energy a combo of Vassell and Johnson can bring to the lineup. “The future looks bright.”

Throughout training camp Mills has been saying he’s going to be more aggressive on offense in scoring, not just setting up teammates and being a spot-up shooter. Instead, he wants to look to score more like he does when he plays with the Australian National team in international play.

Mills did just that Saturday throughout the game. In just 20 minutes, Mills dropped 24 points on 16 shot attempts. He and Aldridge led the team in shot attempts with 16 each. Mills was scoring from all over the floor by attacking the paint and using screens to hoist pull-up jumpers from outside and mid-range.

He scored 12 points from three, 6 in the paint, 4 from mid-range, and 2 from the free throw line. Mills was the most efficient player in the game scoring the ball, as he scored 1.20 points per minute.

“Yeah definitely, like I’ve said before it’s a mindset thing,” said Mills of being more aggressive in scoring the ball. “Keeping that mindset for the course of the season.”