Welcome to the Day Off, where we’ll be looking at observations and trends with the San Antonio Spurs on their off day as they progress through the 2020-2021 season.

The Spurs kicked off their opening week of the season by going 2-1, as they defeated the Grizzlies and Raptors, but lost to the Pelicans on the second night of a back-to-back.

Here’s what topics will be covered:

Player of the Week Nominations

Spurs guards Dejounte Murray and DeMar DeRozan were recognized by the NBA for their play in the opening week of the season, as the two of them along with Brandon Ingram and CJ McCollum were the four nominees for the Western Conference Player of the Week. Ingram was the winner of the award.

Here were the numbers DeRozan and Murray posted in the opening week:

It’s just a small sample size of three games, but in the opening week DeRozan changed his shot profile, attacking the rim and then shooting 3-pointers before mid-rangers.

DeRozan was the main rim attacker, as he logged the most drives on the team at 55. DeRozan struggled against the Pelicans, shooting 3/12 from the floor and only getting two free throw attempts. Pelicans Head Coach Stan Van Gundy said that was one of his teams goals, to slow down DeRozan: “I thought we did a very good job on DeRozan – on his pick-and-rolls and on him individually. We did a good job staying down on shot fakes.”

Keep in mind it’s a small sample size, but Murray was very effective when attacking the rim. He made 10 his 12 shots in the restricted area (83% accuracy). That’s not going to be sustainable for the season, but at least early on, Murray has shown improvement in being more willing to drive toward the basket.

Like DeRozan, Murray has also cut down on the percentage of his shots coming from mid-range, as you can see by his shot profile.

Below, you can see what decisions Murray and DeRozan are making when driving the ball, a stat both players lead the team in.

First week of data on drives from the Spurs' 4 main players who attack the rim (DeRozan, Murray, Keldon, Lonnie) pic.twitter.com/jkngtMqLKm

Defensively, Murray is number one on the team in deflections with 13 and he’s contesting 0.20 shots per minute, which is a number the Spurs wing defenders post.

First week of the season deflections and contested shots per minute for the Spurs pic.twitter.com/APQyQzxfp2

All through training camp, the Spurs kept commenting on how they wanted to continue to play faster with more small ball lineups. That trend has continued through the opening week of the season.

The Spurs are still starting small with Keldon Johnson at the 4 and they’re ranked 9th in pace with 104.7 possessions per 48 minutes.

The Spurs are ranked 7th in fast break scoring with 16.7 fast break points per game.

Through the opening week of the season, there have been three areas that have been consistent in all three games for the Spurs’ defense.

Keeping opponents off the offensive glass – The Spurs continue to limit offensive rebounds for the opponent, holding them to a 21.7% offensive rebound percentage, ranked 5th in the NBA. This is a good sign that second chance points aren’t hurting the team despite playing smaller lineups for 48 minutes.

Opponents continue to attack the rim – With small ball, opponents continue to attack the rim. Opponents are averaging 38 shots in the restricted area against the Spurs’ defense, which ranks San Antonio 27th in that category. One improvement the Spurs are showing is guarding the rim, where opponents are only finishing 58% of their attempts there, good enough to rank the Spurs 8th.

Spurs opponent percentage of 3s that were wide open in the opening week: pic.twitter.com/8tsIY8aIBc

With Bryn Forbes gone and Derrick White injured, Walker IV has become one of the Spurs’ early reliable three point threats along with Patty Mills.

Walker IV has connected on 9 of his 19 three point attempts (47% accuracy) and all of those shots are coming off spot-up action.

When you watch the Spurs, you can see Walker IV being very active off the ball to get himself open looks and he also relies on the dribble penetration from his teammates to drive in and kick out to him.

63% of Walker IV’s threes so far this season have been wide open. Along with his 3-point shooting, Walker IV has shown the ability to put the ball on the floor and attack to create for himself or others, as he’s made 8 of his 11 attempts in the restricted area (73% accuracy), though 30% of his shot attempts come from there. 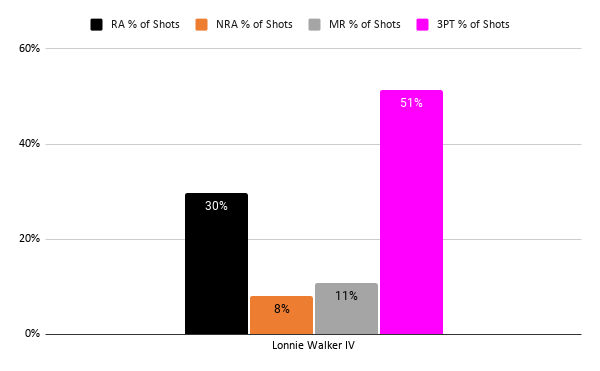 Paint and 3s Only for Keldon Johnson

Keldon Johnson has been very aggressive attacking the rim, as he leads the team in attempts from the restricted area. When Johnson catches off secondary action, he’s immediately driving and seeking contact with a defender to try to finish or draw free throw attempts. He’s made 12 of his 22 attempts attacking the rim (55% accuracy).

In the halfcourt when he’s off the ball, defenses are leaving him wide open and seeing if he can make his three point shot. A week into the season he’s shooting 30% from outside. 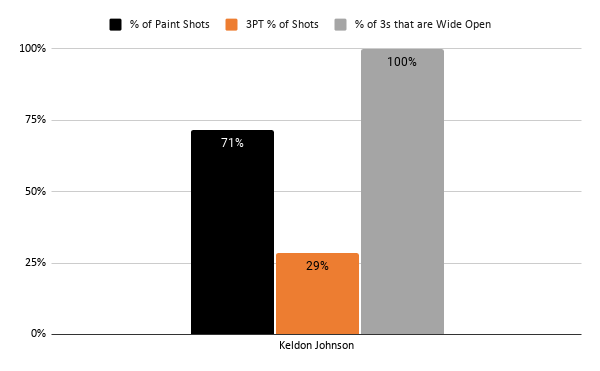 All data comes from NBA.com/stats