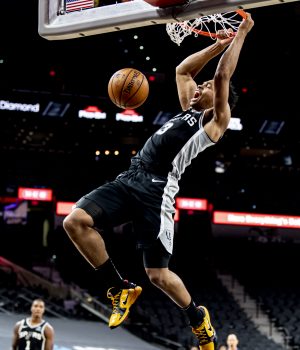 Wednesday the San Antonio Spurs fell to 2-2 on the season after a loss to the Los Angeles Lakers. Let’s jump right into the day off and the topics to be explored:

The Good and Bad of Playing Fast

The Spurs are still adapting their playing style to a faster approach, where they’re 7th in fast break scoring with 17.3 points per game. They’re also 10th in pace at 103.8 possessions per 48 minutes.

While that’s a good sign on offense that the team is being productive with the units they’re putting on the floor, there’s also a concerning sign, and that’s the transition defense.

The Spurs are currently ranked dead last in the league in opponent fast break points, where teams are scoring 19.3 points per game.

The point of playing faster was to give the Spurs an advantage with quicker lineups against their opponents, but instead, the Spurs find themselves getting outscored by 2 in fast break points.

When I asked Dejounte Murray about the team’s approach to stay small against the Lakers, who play more traditional 4/5 players in lineups, he commented on how it’s the transition defense that was the biggest factor for the loss Wednesday.

“I think we just didn’t compete as far as little things, like transition d, we just didn’t get back whether it was a make or miss,” said Murray. “We was playing a little laid back and not taking them serious like they’re the champs, you know, they’re the team to beat. Like I said, we just didn’t take it too much serious and follow the game plan. Transition d killed us to start the game off and I think it was just hard to find that rhythm and get back in a flow.”

During their championship years, the Spurs used to follow a diagram of the Krebs Cycle, where their team philosophy was to follow this circular path:

The Spurs’ halfcourt defense is currently ranked 11th per CleaningTheGlass.com and they’re the best team at keeping opponents off the offensive glass, so their biggest issue right now on the defensive side of this cycle is transition defense.

Though they’re about a league average offense four games into the season, one consistent part of the Spurs’ offense is their ball movement, where they’re ranked 4th in assisting on 66.5% of their made shots.

You see that many players contribute in the scoring department, as the Spurs currently have seven players averaging 12 or more points per game.

Part of this is the improved dribble penetration from the wings like Murray, Lonnie Walker IV, and Keldon Johnson driving and attacking the defense to help DeMar DeRozan in having consistent threats to attack the rim.

The early numbers show Rudy Gay’s having a good start to the season on the defensive end of the court, as he’s one of the players in the top 3 of some different defensive stats as you’ll see in the chart below:

Gay is first on the team in deflections per minute, first in defensive field goal percentage and second in blocks per minute.

According to CleaningTheGlass.com, when Gay is on the floor, the Spurs are holding opponents to 94.9 points per 100 possessions, that’s a 29.7 difference, marking the best number on the team.

You saw Head Coach Gregg Popovich go to Gay at the 5 in the closing minutes of the game against New Orleans, since LaMarcus Aldridge and Jakob Poeltl weren’t switchable onto Brandon Ingram when he used pick-and-rolls to get away from Walker IV.

It’s always best to approach small sample sizes with caution and the bubble was an example of that. During bubble play, Keldon Johnson knocked down 11 of 17 three pointers. So far in this season, defenses haven’t been guarding him like he’s a threat from outside, as all of Johnson’s three point attempts have been wide open (6+ feet from a defender) and he’s knocked down 4 of his 12 threes.

When Johnson catches the ball and doesn’t take the open three, he’s ready to attack the defense on a drive where 61% of his drive attempts end up in a shot attempt, 17% in a free throw attempt, 11% in a pass, and 17% end up in a turnover.

Johnson is first on the team in shots closest to the basket in the restricted area, but as he continues to become more of a threat attacking the rim, defenses will scout him and shift to try to limit his attempts at the rim, meaning they’ll continue to leave him open from three.

Johnson will have to continue to make himself a threat from three and also on his decision making when he does drive, if he sees the defense preparing for his drives by putting more defenders in help situations.

It’s important to keep in mind two things for Johnson: 1) It’s still early, just 4 games, and 2) he’s’ only entering his second season in the league, where he didn’t play much in his rookie season until the bubble, which was still only 8 games.

As mentioned on the Spurscast this week, Johnson has shown his versatility on defense, where he’s had to guard Dillon Brooks, Pascal Siakam, Zion Williamson, and now LeBron James as his primary matchups in the first four games of the season.