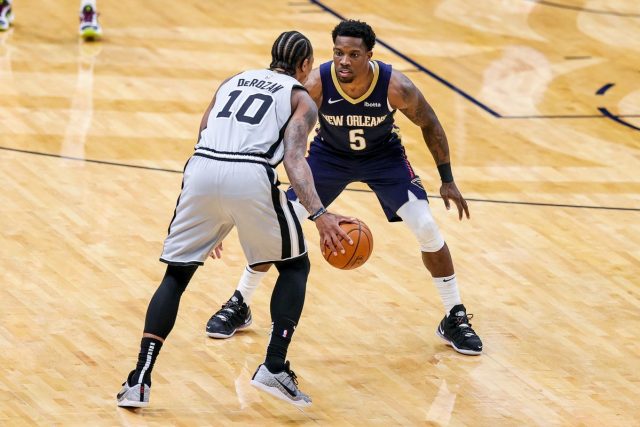 Through four games in the 2020-2021 season, DeMar DeRozan has been averaging 21.5 points per game and continuing his strong play with the San Antonio Spurs’ new young core that started in the NBA Bubble last summer. While this strong play will help the Spurs this season, it may create a difficult decision for the Spurs around the trade deadline – if the Spurs are in the playoff hunt in March and DeRozan has continued to play well with the young core, do the Spurs trade him for young players or draft picks or push for the playoffs this season?

Both options have merits. If the Spurs were to trade DeRozan for young players or draft picks, they could improve their future team, especially if they can receive a bigger wing who can play the 4 next to the Spurs’ perimeter core and Jakob Poeltl. While the Spurs’ young core looks talented, no one player appears to be a “best player on a championship team” level player, and the easiest way for the Spurs to get that player would be to draft him or to trade for him, and having more young players or draft picks allows the Spurs to try either option.

In seasons past, finding a team that makes sense as a DeRozan trade partner was difficult. Contenders usually have a strong wing rotation already and DeRozan doesn’t make sense on a rebuilding team. This season, there is a new type of team that may want to trade for DeRozan – a team competing for a play-in spot. For teams that are trying to win now but are having a disappointing season, acquiring DeRozan can be their solution to locking in a spot as the 9th or 10th seed to make the play-in tournament. If the Spurs can trade DeRozan to a team that is competing for a play-in spot that ultimately does not make the playoffs, the Spurs could potentially walk out of the season with two lottery picks.

It seems, however, that the Spurs are doing everything they can to make the playoffs this season. And while that may seem like it would keep them from acquiring more young talent to improve their future team, it is understandable they would want to do this. First, every season that Gregg Popovich is the coach, the Spurs will probably try to be competitive for his sake. Popovich probably only has a season or two left in his coaching career and the Spurs want to remain competitive rather than start rebuilding before he retires as head coach.

Another reason the Spurs may want to remain competitive is to allow their young players to have more experience playing in competitive games with meaning, particularly playoff games. It seems that the Spurs believe that this young core will be their future, and they will want to give them experience in higher stakes situations early in their careers. If the Spurs keep DeRozan, this can help them play in these types of games and give the young players another veteran who has experienced many high stakes games to learn from.

It appears that DeRozan fits in well with the Spurs’ new style of play, making him both more important to the Spurs and more attractive as a trade piece to teams wanting to make the playoffs. What the Spurs decide to do before the trade deadline will require them to factor in this season and the future.