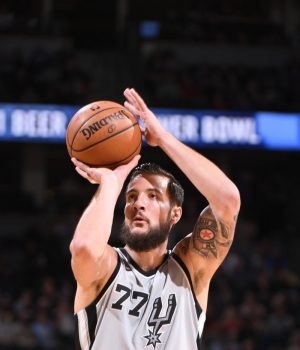 The San Antonio Spurs hung tough in the Mile High City but fell 117-109 to the Denver Nuggets (31-26) at the Pepsi Center on Tuesday night.

The loss was the third game of six for San Antonio’s annual “Rodeo Road Trip”, which has seen them go 1-3 through four games. Just like Monday night, San Antonio played without Kawhi Leonard, LaMarcus Aldridge, and Rudy Gay.

Here is what went good and bad for the Spurs, as well as three standout players: Joffrey Lauvergne, Tony Parker, and Dejounte Murray.

Joffrey Lauvergne: After having a great preseason, Joffrey Lauvergne saw his regular season plagued by injuries to his hand and ankle. As a result, he has rarely been used by Coach Pop this season.

With Aldridge out, Pop went to Lauvergne the past two nights and the results have been telling. He finished with a career-high 26 points to go along with 11 rebounds. Pop rewards good performances with playing time, so let’s hope that he will reward Lauvergne with more time on the court after the All-Star break.

Tony Parker: The veteran Spurs point guard had his best game of the season, despite the loss. He finished with a season-high 17 points and four assists on the night.

Parker found Pau Gasol for three of his four helpers in the third quarter. Pop making the move to bring Parker off the bench seems to have worked well. Now if San Antonio could get healthy, you could see the full benefits of it.

Murray swished his first three shots of the game and finished 6-of-10 overall from the floor. He scored 12 points on the night and remained aggressive all night long. He went in for rebounds, drove the paint, and found open guys for buckets.

The Spurs head into the 2018 NBA All-Star break with a 35-24 record, sitting third in the Western Conference. The team will return to the court on Feb. 23 to resume their Rodeo Trip when they face the Denver Nuggets at the Pepsi Center.