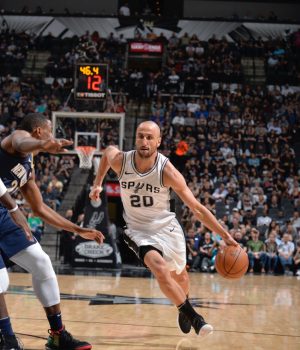 SAN ANTONIO – The San Antonio Spurs returned to the AT&T Center after nearly a month away but fell 121-116 to the New Orleans Pelicans (35-26) on Wednesday night.

Already missing two of their starters in Kawhi Leonard and Pau Gasol, San Antonio would also lose their top scorer LaMarcus Aldridge to a right ankle injury in the first half. Add Coach Gregg Popovich getting ejected early in the third quarter and it would not be a winning recipe.

Here is what went good and bad for the Spurs, as well as three standout players: Joffrey Lauvergne, Rudy Gay, and Manu Ginobili.

Joffrey Lauvergne: With Pau Gasol out with a knee injury, Pop inserted Lauvergne and once again the fourth-year big man showed why Pop and the Spurs staff were so high on him during preseason play.

Lauvergne finished with 14 points and seven rebounds off the bench. He showed no fear going up against MVP candidate Anthony Davis and remained aggressive in the post. Murray and Parker both found him for dunks and he played solid defense on the other end of the court.

Because of his solid play earlier in the game, it became a head scratcher as to why Assistant Coach Ettore Messina declined to use him in the fourth quarter down the stretch.

Rudy Gay: After missing seven weeks of action with a heel injury, Rudy Gay struggled out of the gate in his return post All-Star break. However, that changed when the Silver and Black returned home.

Gay scored 19 points on the night, connecting on two of six three-pointers. He showed why he was signed in the first place by San Antonio during the offseason. Without Aldridge in the second half, Gay posted 11 points in the third quarter and sparked the Spurs to a 15-point lead.

Manu Ginobili: What else is there to say about Manu “Grandpa Juice” Ginobili at this point?

Ginobili would use his veteran status to help the Spurs when they were down three core players. He sliced and diced his way to the basket in the first half, drew a foul on Davis in the third quarter, and hit a big-time three before halftime. He truly gave it his all as he does every night.