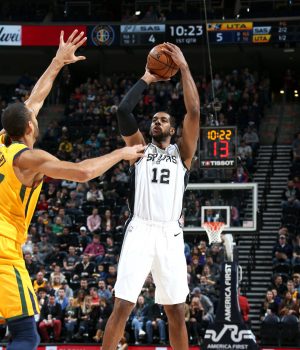 The San Antonio Spurs struggled to find their footing as they suffered a 139-105 loss to the Utah Jazz (12-13) to kick off a brief two-game road trip on Tuesday night.

The loss is the third in the last four games for San Antonio, who suffered their third blowout loss in less than a week. The Spurs also saw their road record go to 4-9 with the defeat.

Jakob Poeltl scored a career-high 20 points to lead San Antonio, while both LaMarcus Aldridge and DeMar DeRozan each chipped in 16 for the struggling Spurs.

San Antonio has now lost by 30-plus points in three of their last four games.

Meanwhile, for the Jazz, it was a very different story. Donovan Mitchell led the Jazz with 20 points and Rudy Gobert added 18 points and 10 rebounds. Kyle Korver made his home debut since being traded back to Utah and scored 15 points, shooting 3-for-4 from three-point range.

As a team, the Jazz converted a franchise record 20 three-pointers on the night.

The Spurs are now 11-13 on the season and will return to the court tomorrow night when they take on the LA Lakers (14-9) at Staples Center.