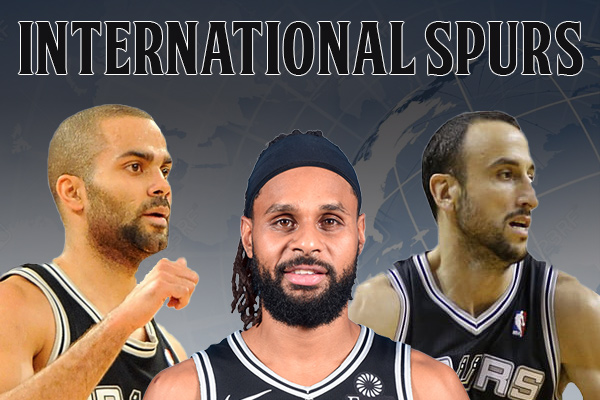 We’ve counted down 31 international players from all over the world so far, which includes some guys that won multiple championships with the San Antonio Spurs.

Numbers 41-31 featured some players that were legends overseas but never entirely made a splash in the Alamo City. France dominated numbers 31-21 with names like Joffrey Lauvergne, Nando De Colo, and Ian Mahinmi.

In the first half of the top 20 international Spurs ever, some fan favorites, playoff heroes, and current members of the team made appearances.

The top 10 foreign-born Spurs of all time evoke a sense of pride in the city of San Antonio as they all have made significant marks on the franchise and, in some cases, became legends. We start with another Argentine that succeeded both overseas and in Texas.

While Fabricio Oberto’s most significant contributions to the game of basketball came on the Argentine national basketball team, he made some waves in the NBA as well.

Oberto’s biggest contribution as a member of the San Antonio Spurs was undoubtedly his work in the 2007 NBA playoffs, capped off by some clutch baskets to clinch the team’s fourth title in eight years.

Thirteen years ago today, Fabricio Oberto scored 5️⃣ points in 28 seconds late in the fourth quarter to help win Game 4 of the 2007 NBA Finals vs. the Cleveland Cavaliers!

An overlooked contribution of Oberto’s came just one round earlier against the Utah Jazz, as he tallied two consecutive 14 point, seven-rebound games to begin the Western Conference Finals.

Fabricio is also the first player on this list that was part of the iconic Argentine national team that knocked off Team U.S.A. in 2004 to win Gold. Oberto was inducted into the FIBA Hall of Fame in 2019 and will always be beloved in the Alamo City.

From someone that was always beloved in San Antonio, we turn to a guy that’s been getting beaten up by Spurs fans as of late. It’s not a secret that Marco Belinelli’s shooting has fallen off this season, which isn’t ideal for someone that already has problems defensively.

Still, Belinelli deserves a spot in the top 10 due to his 2014 season alone. In his debut season with the Spurs, Marco shot a scorching 43 percent from deep, winning the NBA’s three-point shooting contest along the way.

Marco’s role as a persistent threat from beyond the arc was pivotal in spacing the floor for what was becoming the big four, as Kawhi Leonard was beginning his ascent to superstardom.

Perhaps the biggest shot in the 2014 NBA Finals against the Miami Heat was this one by Belinelli that helped stop the bleeding after a furious comeback attempt by LeBron James and company.

Rewatched the 2014 Finals, and the most important shot in that series was actually made by Marco Belinelli.

Dominique Wilkins is the most significant example of why I had to preface this entire list with a warning: This countdown is mostly factoring in careers as a Spur and not overall careers.

Clearly, with nine All-Star appearances, seven All-NBA selections, and a Hall of Fame induction, Wilkins would be at the top of this list otherwise.

As it stands, considering he only played a total of 63 games in San Antonio, eighth seems about right for Nique. After playing in Greece from 1995-96, Wilkins signed with the Spurs for the following season.

With David Robinson injured for almost the entire season, Wilkins led the Spurs in points per game despite only starting in 26 games. Even though he was 37-years-old and nearing the end of his career, Dominique still gave Spurs fans a reason to come out to see the team that would end up going 20-62 that season.

Pau Gasol is yet another guy that joined the Spurs a little bit too late in his career. At age 36, Pau Gasol still had some gas left in the tank — it just wasn’t what he could’ve brought a couple of years earlier.

As the ever-reliable Adrian Wojnarowski reported after the summer of 2014, the Spurs almost got their guy just when he was needed most, before Gasol ultimately committed to the Chicago Bulls.

Pau ended up averaging 17.6 points and 11.4 for Chicago and made the All-Star team in both seasons. Still, they were bounced out in the second round in the first year and didn’t make the playoffs in the second.

Looking back on it, I imagine Pau has some regrets about not joining the Silver and Black earlier. As it turned out, Gasol still made enough of an impact to be one of the greatest international players the Spurs have ever had.

Tiago Splitter is yet another late-round pick that the Spurs got right. Selected 28th overall in 2007, Splitter used his high basketball IQ and inside presence to maintain a shooting percentage of 52.3 or better through all five seasons in San Antonio.

Most remember Splitter for his performance in the 2014 playoffs, in which he averaged 7.5 points and 6.1 rebounds through his 23 games played. And also for this:

Tiago was pivotal in the Spurs’ latest championship run and, in return, was rewarded by being the first Brazilian-born player ever to win an NBA championship.

Yes, Swen Nater played for the Spurs way back in the 70s when they were still in the ABA, but his accomplishments are still impressive enough today to get him into the top five.

As you can see, Nater was nearly a 15-point, 15-rebound guy throughout his two seasons in San Antonio, leading the league in rebounds with 16.4 per game in 1974-75.

The 6-11 center was a walking double-double throughout his career, and his best two years in an 11-year career were with the Spurs.

If the recent championship dominance of the Spurs didn’t cause me to be biased, Nater would probably be in the top three of this list.

There haven’t been that many players in Spurs history that are more fun to watch than a prime Boris Diaw. The 6-8 Frenchman was a point guard trapped in a forward’s body.

Diaw was a wizard with the ball when it came to passing, often serving up fresh croissants to teammates when they weren’t expecting it.

After 10 seasons of coming up short, Diaw shined bright on a team full of bright stars in the 2014 playoffs, averaging 9.2 points, 4.8 rebounds and 3.4 assists per game off the bench.

Gregg Popovich utilized Diaw’s versatility beautifully in the NBA Finals against LeBron James and the Miami Heat, electing to bump his minutes up from 25 in the regular season to 35.

Without Diaw, the Spurs’ run in the 2014 playoffs would not have been possible.

In March 2012, the San Antonio Spurs signed a 23-year-old Patty Mills fresh off a season in which he played just 12.2 minutes per game with the Portland Trail Blazers. Not even one full month later, Mills dropped a career-high 34 points and 12 assists in a win over Golden State.

Patty quickly made it known what he was capable of on the offensive side of the ball, but over the years, he became much more than that.

Now in his ninth season with the Spurs, Mills has become the heart and soul of the team with the Big Three retired. His passion for the game is only outdone by his greatness as a teammate and ambassador.

With the social movements going on for racial justice, Patty recently spoke on ESPN about his own experiences with racism growing up.

"It impacted me tremendously. I went through a lot of trauma and situations. Being able to help support and educate is key here." @Patty_Mills on how racism impacted him growing up in Australia (🎥: @espn) pic.twitter.com/aPEI0isYnW

Now, for the reveal that everyone has been waiting for since part one of the series, numbers two and one.

In what was easily the toughest choice to make on this whole list, Manu Ginóbili barely misses the top spot at number two. Most beloved Spur of all-time? Probably so. Bigger heart and passion for the game than just about anyone? Definitely.

It’s hard to adequately put into words just what Manu Ginóbili meant and still means to the city of San Antonio. Statistics and accolades aside, Manu was one-of-a-kind in both his style of play and his love for the game.

The way Manu conducted himself on and off the court filled everyone with pride, which was evident in the reception he would get every time he checked into home games and even many road ones.

It’s hard to imagine where the Spurs would be today without Manu. His love for the city resonates loudly — and the feeling is mutual.

When looking at the numbers and his team accomplishments, no international player has done more for the San Antonio Spurs than Tony Parker.

On top of his most prestigious accomplishment of being the Finals MVP in 2007, Parker also made six All-Star appearances and was selected to All-NBA teams four times in his career.

Tony’s fearlessness when attacking the paint was his calling card, and his speed only made him that much more unstoppable.

What gave TP the slight edge over Manu undoubtedly stems from the fact that he was a starter for 96 percent of his games in San Antonio.

Ginóbili famously gave up his starting spot for the betterment of the team, instead sparking the Spurs’ second unit in two-thirds of his total of 1,057 games played. As a result, Parker played over 10,000 more minutes for San Antonio than Manu and as was in a better position to be more productive.

Tony’s willingness to learn from his mistakes and handle Coach Popovich’s tough love at times turned him into the best point guard the Spurs have ever had.

Parker leads the franchise in all-time assists by far with 6,829 to Avery Johnson’s 4,474.