Yesterday, I began the two-part series of Tim Duncan’s greatest moments against his fellow 2021 Basketball Hall of Fame inductees with Kevin Garnett. Today, the focus shifts to arguably the biggest true rival of his career.

Throughout their reign at the top of the NBA, the San Antonio Spurs always had to deal with the Los Angeles Lakers. Both Tim Duncan and Kobe Bryant prevented each other from at least another three or four rings before they ended their careers, which is what made the rivalry so fun to watch.

Altogether, the two faced off a staggering 82 times, enough to play their own full regular season.

“That rivalry is what fueled the majority of my career,” Bryant said of the Spurs (subscription required) four years ago, the night he played at the AT&T Center for the final time.

As Express-News writer Mike Finger noted, every time Bryant and the Spurs met in the playoffs, the winner advanced to the NBA Finals.

Both Bryant and Duncan ended their careers with five NBA titles, with most of them involving knocking the other out of the postseason on their way to a championship.

As the two get set to be immortalized in the Basketball Hall of Fame, here’s a look back at the five greatest moments between the two legends.

5. Kobe warns Shaq about the San Antonio Spurs and Duncan

The first time the San Antonio Spurs won an NBA title, they had to go through the developing star duo of Kobe Bryant and Shaquille O’Neal.

The Lakers had just dispatched the Rockets in the first round and Shaq wasn’t intimidated by what was looming ahead. Bryant, on the other hand, served a fair warning to the big man.

“We were about to move on from the first round of the 1999 playoffs. I remember asking Shaq if he was ready. “For what?” He questioned. “This boy we’re seeing in the next round,” I replied. “Robinson?” “Nah, the other one.” “He’s soft,” said Shaq.

The response from O’Neal isn’t exactly a surprise when you consider how he’s often belittled the accomplishments of the Spurs with asterisk talk or saying Tim only finished his career with four titles.

On the other hand, Bryant had an appropriate fear of Duncan and the Spurs. “I’ve been watching him all year,” Kobe continued, “and he’s a problem that you’re going to have to deal with.”

As Bryant recalled, Shaq waved off his warning, and then the Spurs swept L.A. out of the second round by an average win margin of eight points.

Tim Duncan had 18 games of NBA experience before his first meeting with Kobe Bryant on December 5th, 1997. San Antonio was coming off an overtime loss to the Clippers and on the second night of a back-to-back when they took on the Lakers at the Great Western Forum.

On this night, Bryant came off the bench for the Lakers and still scored 17 points, which was more than anyone not named Duncan or Robinson on the Spurs.

Tim finished with 18 points, nine boards, and two blocks, but committed five turnovers in a 10-point loss to Bryant’s Lakers. While the game itself wasn’t necessarily spectacular, it’s still special in that it was the starting point of a legendary rivalry.

The Lakers went on to sweep the season series that year and take the first two games in 1999 before the Spurs won the last meeting and followed that up with a four-game playoff sweep of L.A.

3. Tim and Kobe put up classic playoff performances in series-opener

After the Spurs dethroned them in 2003, the Lakers took advantage of their big-market appeal to attract a couple of stars in the twilight of their careers.

Gary Payton and Karl Malone, at ages 35 and 40 respectively, teamed up with Kobe and Shaq to try to capture what eluded them for their entire careers — an NBA championship.

The additions worked to perfection throughout the season, as Los Angeles finished with an impressive 56-26 record and easily defeated the Rockets in the first round of the playoffs in five games.

In the series opener against the 57-25 Spurs in round two, Duncan and Bryant had a classic duel in which both finished the game with 30+ points and 10+ rebounds.

Kobe played a whopping 45 minutes and ended the night with 31 points and 10 boards while Duncan posted 30 points and 11 rebounds to lead San Antonio to an 88-78 win.

Unfortunately for the Spurs, they’d go on to blow a 2-0 series lead to one of the NBA’s first iterations of a superteam. The Lakers went on to advance to the NBA Finals but managed just one win against the Detroit Pistons.

2. Tim Duncan gets the last laugh

Nothing statistically stands out too much about Duncan and Bryant’s last meeting, but there are a couple of reasons it’s so high on this list. First, it capped off probably the greatest individual rivalry Duncan had in his career.

Secondly, the game ended with Kobe shining as usual but Duncan still quietly getting the win. Winning is all Tim cared about, so seeing him get the final victory over Bryant means a little more than the average win.

February 19, 2016 was the last time the two met on the court, with the Spurs walking away victorious 119-113. Bryant and Tony Parker led all scorers with 25 points each while Duncan pitched in 12 points and 13 rebounds in the matchup.

After the game, the media kept poking at Duncan to offer some heartfelt words about his time playing against Kobe, which was met with awkward indifference after repeated attempts.

Of course, we all know they both respected each other greatly and motivated one another throughout their careers.

As someone who watched every game of the 2003 championship run live on TV, the first vision that comes to my mind from the series against the Lakers is Derek Fisher crying on the bench. Was much of that bitterness? For sure.

Los Angeles was in the midst of going for a four-peat, one that had put a quick halt to the Spurs’ hopes of doing anything remotely similar after their 1999 championship. As such, I saw them as an annoying obstacle that finally needed to be stopped.

The 2003 series between the Spurs and Lakers was full of spectacular performances from Kobe and Tim until Tim decided enough was enough in Game 6.

Duncan and Kobe had traded 36-point performances in Games 4 and 5 to split both, and San Antonio had a chance to close the door on the Lakers in their own building.

When it was time to wrap the series, Duncan had one of the best performances in playoff history. As Bill Walton put it while calling the game, “How many players have played this well ever?”

Duncan’s line that night? 37 points, 16 rebounds, four assists, and two blocks on 16-of-25 shooting. The icing on the cake was many of those were scored on Shaquille O’Neal.

The Spurs went on to win their second NBA title after their 110-82 win while the Lakers wouldn’t win another until 2009.

The tragic passing of Kobe Bryant will forever be painful to anyone that’s ever loved the game of basketball and everything he did for the game.

When he and Duncan are both inducted into the Hall of Fame soon, it’ll be a well-deserved honor for two of the greatest champions the game has ever seen. 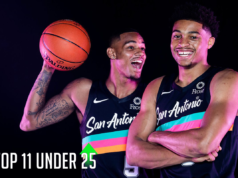