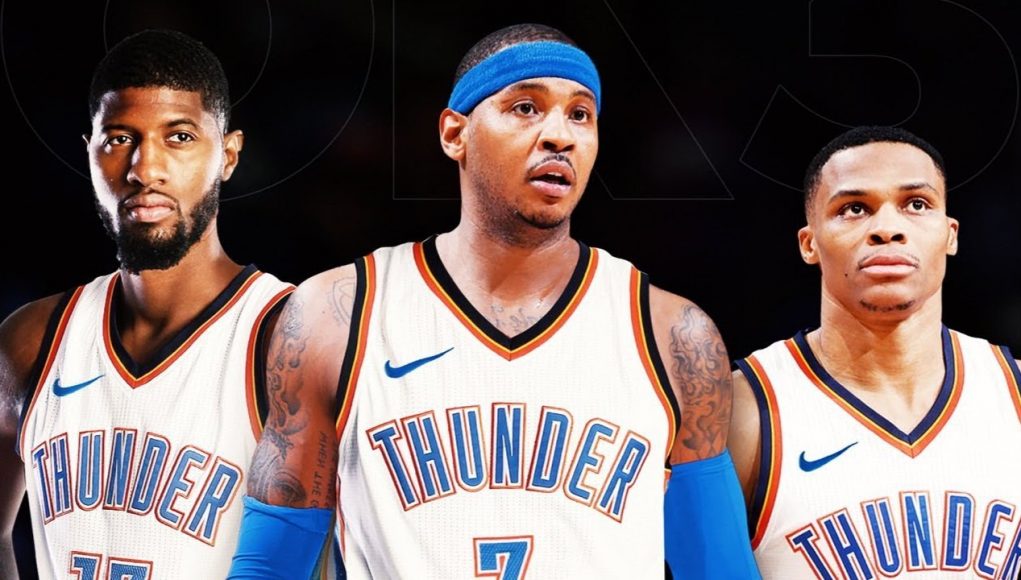 To preview tonight’s San Antonio Spurs game against the Oklahoma City Thunder, I talked to Charles Chaney, the founder and editor of ThunderDigest.com. We talked about how the Thunder were meshing after two key Summer acquisitions and discussed tonight’s matchup.

1. This will be the first time the Spurs and Thunder meet this season. What can you tell us about how the team is meshing, especially with two huge additions over the Summer in Anthony and George?

There’s still a lot of chemistry issues with the Thunder. Especially with starters missing games. Who am I talking to? Spurs are without Kawhi, you know what I”m going through. Oklahoma City is still trying to figure out who’s the alpha. We all know it’s Russell Westbrook but he’s still quite passive, which leads to Melo going old school bad ISO. No worries yet. However, if this still continues come January, we may be regretting a trade.

2. With Kawhi Leonard out, the Spurs are left with just one real perimeter defender in Danny Green, and Patty Mills isn’t really known for his defense. How do you think the Thunder will try to attack that?

Leonard isn’t the system in San Antonio. It’s all the players who buy in. Despite the lack of Kawhi on the perimeter, the Spurs are middle of the road on defending the perimeter. Oklahoma City shoots a lot of threes. They’re fifth in attempts. Expect that to be the case.

3. Westbrook, as you have noted on Thunder Digest, has gotten off to slow starts early this season. Do you attribute that to him wanting to get his new teammates involved since there is less pressure on him to provide the majority of the offense?

Absolutely. As I’ve said in question one. Westbrook is quite passive and defers, trying to get his teammates involved. A couple of plays in the win over Chicago, Westbrook had a wide open lane to the basket but threw  unnecessary passes. That led to poor quality of shots for his teammates. Oklahoma City needs Westbrook to kinda go back to MVP Westbrook. It’s when Oklahoma City is at their best. He attracts defenders and it allows for easier, open shots for the rest of his teammates.

4. Aside from the offense being more faceted this year with the additions, it seems like the Thunder defense is improved this season, but they are still sitting at 7-7 as a result of a three-game winning streak. Is the record maybe a bit deceiving since it is still so early and they did introduce two major new pieces?

All of Oklahoma City’s losses are all by nine points or less. They’re 0-3 in games decided by four points or less. Defensively, they’re second in defensive rating and second in points allowed. The Thunder have done a good job defending. It’s their offense which has let them down this season.

5. What do you expect to see in this matchup tonight and who do you have coming out on top.

I have this as a scheduled loss. Spurs in a close one. Oklahoma City’s bench isn’t up to par. If Oklahoma City wins this it’s because Steven Adams plays and plays well. Oklahoma City has to find a way to limit Aldridge and play some defense in the fourth quarter for once.