Facebook
Twitter
Email
Print
"Big Shot Bob", otherwise known as Robert Horry, had a storied and championship laden NBA career. He managed to win seven championships with three different NBA teams, a feat that only John Salley duplicated. Horry won two championships with the Houston Rockets, three with the Los Angeles Lakers and two more with the San Antonio Spurs.
Robert earned his nickname, "Big Shot Rob," due to his uncanny ability to hit clutch shots in big games throughout his illustrious basketball career. Spurs fans may remember the huge shot he hit versus Detroit in the 2005 NBA Finals.
Horry recently opened up with San Antonio Magazine, on many subjects, including his tenure with the Spurs. Interesting to note is how much of an impact Tim Duncan has in drawing free agent players to San Antonio as Horry mentions. Also, he liked how Gregg Popovich would cuss him out mainly because of the dinners that would follow.
CA: After six years playing in LA, you came to San Antonio. Was it to be closer to your family in Houston? 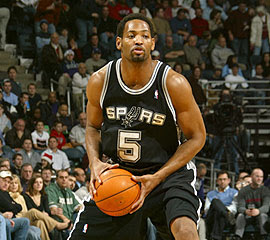 RH: Back in 2001 I wanted to opt out of my contract with the Lakers, but I think that’s the year everybody thought Tim Duncan was going to Orlando. I said, “I don’t want to go to San Antonio if Tim isn’t there; that’s crazy.” When the Lakers didn’t pick up the option on my contract, the first places I said were Dallas, Houston and San Antonio. But I didn't really want to come back to Houston, even though I wanted to be close to my family. The competitor in me wanted to win. I talked to my wife about it. She said, “I know how you are when you don’t win. No, I don’t want you to be in Houston.” San Antonio had one slot left open and they gave it to me. My first year in San Antonio I made the Veteran Free Agent Exception. When a vet comes in, you can get X-amount of dollars. Nobody knows this, but after my first year, I felt so bad about how I played my first year that the second year, I took less money to play because I didn’t feel like I had done what I was supposed to do. After that year, in 2005, we won it. Dallas offered me $5 million more than what I was making in San Antonio to come play. I turned them down. I just said, “No. I like what San Antonio has here. I like the family here, I like the coaches here, I like everybody here.” The San Antonio Spurs Organization was great to their players, the way they treated them, the fact that they didn’t rush them to get back on the court when they were injured. I liked the way Coach (Gregg) Popovich would cuss you out, but take you to dinner after that. He always kept that line of communication open. I felt real comfortable in the situation. It’s things like that, that people don’t know what athletes do to stay in certain places. You know, $5 million is a lot of money.
CA: Playing for the Spurs must have felt very different than the other teams you played on.
RH: It felt different for two different reasons: One, because all the players talk to each other. Everybody was cool with one another. Everybody kind of hung out. Really, I was in another place in my life. I was in my 30s. I had already had five championships. I was in that mellow mode where I felt good about everything. I was in a happy place in my life where I could just go out and play basketball, enjoy my teammates, not worry about what's in the news. It was none of that BS that comes along with playing in high–market value places. It was the way that you grew up playing basketball, just playing for fun, but in this case you got paid to do it. That’s just how it felt.
CA: Who do you miss from the team?
RH: I miss Bruce (Bowen). I miss Tim (Duncan). I miss talking to Manu (Ginobili) and listening to his accent. I miss Brent (Barry). He was a very funny guy and one of the smartest players I ever played with. Him and Kobe (Bryant) were the two smartest players I ever played with. Just to play with those guys, to have fun and still talk. Brent and I still do NBA TV every once in awhile. I talk to Bruce about once a week because nobody else likes him, but me. (Laughs)
OK seriously… who would enjoy getting a tongue-lashing from Pop?
Clearly, Robert is a unique and classy individual, and has cemented his name in in the annals of NBA history.