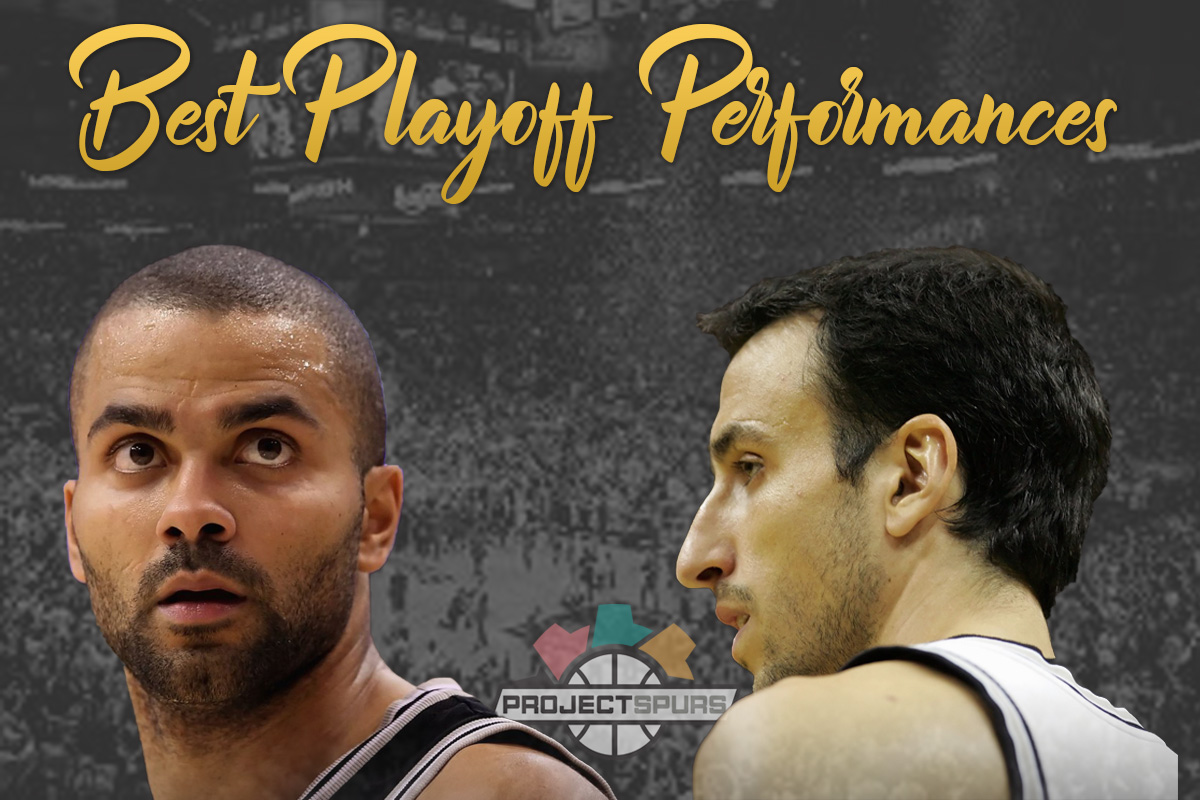 Coming off the most successful five-year stretch they’ve ever had, the San Antonio Spurs ran into some buzzsaws in the playoffs over the next five.

From a prime Dirk Nowitzki to the Phoenix Suns finally exorcising some of their demons, San Antonio finally gave some of their rivals some chances to make a name for themselves in the West.

Still, the Silver and Black did enjoy another NBA championship in this stretch that was capped off by one of the most dominant NBA Finals ever.

We start, however, with the 2006 playoffs, which ended with an all-time classic series and an unfortunate finish.

2nd Rd, Game 6 vs. Mavs – Manu Ginobili: 30 pts, 10 rebs
The truth is, Tim Duncan had a monster Game 7 in this series, putting up 41 points and 15 rebounds. Unfortunately, that wasn’t enough to lead the Spurs to victory.
Since Manu Ginobili has long been crucified for his critical foul of Dirk Nowitzki in this series that was a back-breaker, I wanted to recognize the fact that Game 7 wouldn’t have even been possible without his efforts.
Down 3-2 and in hostile territory, the Spurs and Mavericks were knotted up at 67-67 going into the final quarter. Ginobili then took the game in his own hands, finishing with a game-high 30 points and grabbing 10 boards in an all-out effort to force a deciding Game 7.
Manu gets bashed for one mistake he made in this series in the final game, but it was statistically one of the best series he’s ever had.
2006-07 Playoffs

Many Spurs fans have the 2007 championship toward the bottom of the list when it comes to the most memorable, but it was also one of the most dominant runs in playoff history.

After dispatching Carmelo Anthony and the Denver Nuggets in five games, the Spurs had a date with Steve Nash, Amar’e Stoudemire, and future Spur Boris Diaw in round two.

From the start, Tim Duncan made it clear that Phoenix had absolutely no way to stop him, putting up 33 points and 16 boards in the first game of the series.

Duncan put up similar numbers all series long, but his best outing was the 33-point, 19-rebound game he had to tilt the series back in San Antonio’s favor in Game 3. While Tony Parker took over the 2007 NBA Finals and took home the Finals MVP, Duncan’s dominance got San Antonio there in the first place.

Mike D’Antoni must’ve had nightmares about the Big Three throughout the 2000s. After bowing out to the Spurs in six games in 2007, his Phoenix Suns found San Antonio in their way again in 2008 — this time in the opening round.

Once again, it was Game 3 that saw an outburst from one of the Spurs’ future Hall of Famers. Shooting 17-for-26 for a blistering 65.4 percent, Tony Parker couldn’t be stopped inside, carving up Phoenix’s defense for teardrops and fancy finishes.

The I-35 rivalry was intense throughout San Antonio’s dominant years, with both sides coming out on top at times. The first-round showdown in 2009 saw a prime Dirk Nowitzki pair up with Josh Howard to send the Spurs home early.

In the Spurs’ only win of the series, Tony Parker again had a monster game, shooting 16-for-22 to finish with 38 points and eight assists. San Antonio won Game 2 handily, 105-84, but was simply outmatched in the overall series. The following year, however, they would get their revenge.

With Spurs-killer Josh Howard departed, San Antonio had a much better series in a first-round rematch with the Mavericks in 2010. Dallas was coming off a 55-27 season and had locked up the second seed in the Western Conference while the Spurs were sitting at seventh.

After Dallas took Game 1 in front of their home crowd, the Spurs had to win Game 2 to gain any kind of confidence against their Texas foes. Fortunately, Tim, Tony, and Manu were up to the task.

The Big Fundamental had game-highs in both points and rebounds with 25 and 17, leading the Spurs to a wire-to-wire victory, 102-88. San Antonio went on to upset the second-seeded Mavs in six games.

As we jump into the years 2011-15 next week, we’ll see the beginning of a transition from the Spurs’ aging core, a crushing series defeat, and a triumphant revenge tour.

*For more classic playoff performances, you can read part 1 of the series here and part 2 here.