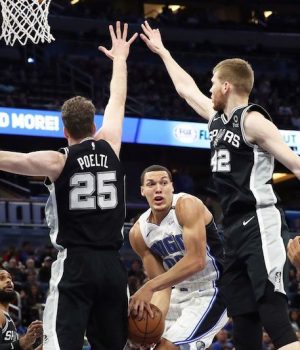 Since the start of their win streak, they have ranked 4th in the league, holding opponents to an effective field goal percentage of 49.9%.

Spurs’ opponents’ shooting has varied wildly from both corners, they are shooting better in the left corner, but 8% and worse in the right corner by 16.7%. They are making above the break threes 0.8% less after the streak.

While most players have improved, one player has made an especially significant improvement – since the start of the streak, Jakob Poeltl’s defensive rating is down from 107.2 to 93.7, a 13.5 points per 100 possession improvement.

The Spurs have defended the paint much better since the start of the streak, and Poeltl seems to be a large reason why. If he can continue his play, he will be a valuable piece to the Spurs playoff rotation and another addition to a young Spurs core that is strong defensively that currently includes White and Dejounte Murray.

All stats from NBA.com/stats.