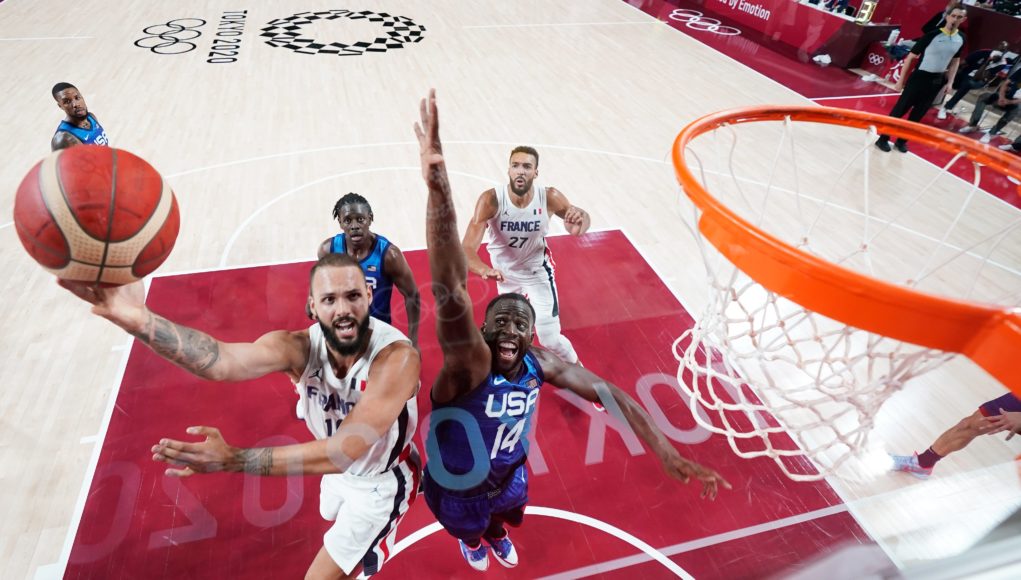 Facing pressure and scrutiny, the US Men’s Basketball team opened Olympic play with an 83-76 loss to France (1-0) in Group A play Sunday night at Saitama Super Arena.

The loss is the first in Olympic play for the men’s team since 2004, the same year they would finish by winning the Bronze medal in Athens.

The U.S. led 74-67 with just 3:41 remaining in the fourth quarter but France closed the game on a 16-2 run to capture the come-from-behind win. The Americans scored just two points in the final 3:41 and missed three consecutive jump shots in the final 31 seconds that would have given them the lead.

“The French team played very consistent basketball on both ends of the court and did a great job,” U.S. head coach Gregg Popovich said. “That’s our goal going forward, to be more consistent.”

The Americans were led by Jrue Holiday (Milwaukee Bucks), who scored 18 points with 12 coming in the fourth quarter. Damian Lillard (Portland Trail Blazers) added 11 and Kevin Durant (Brooklyn Nets) chipped in 10 points but spent most of the game in foul trouble.

Lillard shot just 3-of-10 from the field with four turnovers.

“We let one get away,” Lillard said. “There’s a lot of things we could have done better, including making shots.”

Keldon Johnson (San Antonio Spurs) had one assist and one rebound in nine minutes of action.

France was led by Evan Fournier’s (Boston Celtics) game-high 28 points. He took advantage of a Lillard turnover and put the ball in, giving the French the lead for good in the final minutes of regulation.

Rudy Gobert (Utah Jazz) added 14 points and nine rebounds for France, who snapped the 25-game Olympic win streak for the U.S. men with the surprising victory.

“I think we have a history of dominance and, maybe not always blowing people out, but we have a history of winning,” Lillard said. “It’s not often that you see Team USA go out there and lose, especially to start. So, I think that’s why a lot of people make it seem like the end of the world.”