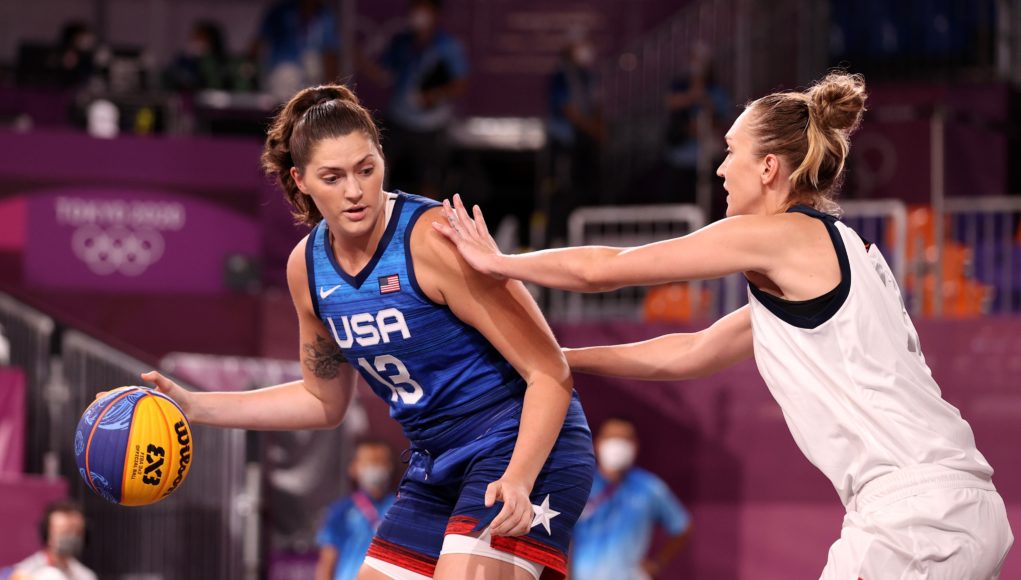 The women’s 3×3 basketball team continued pool play on Sunday with a pair of games with Romania and the Russian Olympic Committee and would stay undefeated in pool play thanks to a comeback in their second game.

The Americans opened the day with a 22-11 win over winless Romania (0-3) at Aomi Urban Sports Park. The opening minutes saw both squads firing on the net, going back and forth. After a timeout, the USA took control, led by Kelsey Plum (Las Vegas Aces) and Stefani Dolson (Chicago Sky).

“I think we just started executed better,” USA guard Jackie Young said. “We got locked in after a little bit. I think, in the beginning, we weren’t executing as well as we should have been.”

The win is the third straight for the Americans and the second consecutive match where they have scored over the required 21 points after having just 17 points in their opener against France on Saturday.

The second game saw Team USA rally for the 20-16 win over the Russian Olympic Committee to be the last undefeated team in pool play.

Team USA trailed 5-2 before Plum and Gray scored four consecutive points. ROC answered back and let 16-15 with 1:38 remaining but the Americans would close the game on a 4-1 run to remain undefeated in pool play.

“I think we expected that, that they were going to play super physical and the fouls were going to be pretty high, but I thought we played through it for the most part,” Plum said. “They’re a really good team, and they’ve been playing together as you can see. They make a lot of really good reads. So, I’m just proud of the way we battled. We could have gotten down on ourselves when we got down early, but we didn’t, and we got the win.”

Team USA is now 4-0 in pool play and will face Italy and China on July 26.