Team USA Women’s Basketball moved one step closer to Olympic glory as they defeated Serbia 79-59 in the Olympic semifinal game at Saitama Super Arena on Friday to advance to the gold medal game.

Despite the final score, the Americans struggled as they committed 17 turnovers but defensively, they held Serbia to just 30 percent shooting.

“It wasn’t our best overall performance,” USA head coach Dawn Staley said. “I thought we did a tremendous job defensively, just making it really hard for the Serbian team to get off clean looks. Offensively, I just thought we put enough points on the scoreboard to win. It wasn’t as clean and fluid as we would like, but at this stage of the game, you’re going to have to win a lot of different ways, and we found a way to win.”

Both Brittney Griner and Breanna Stewart posted double-doubles to lead Team USA to victory. Griner had 15 points and 12 rebounds and chipped in Stewart 12 points and 10 boards. Chelsea Gray finished with 14 points.

“I think that they had us catching it out a little bit farther, a little bit out from where we wanted to be,” Stewart said of the slow start. “And that’s how Serbia plays. I mean, they’re tough. They’re physical. They’re gritty, and they showed that today, and they’re going to go after bronze tomorrow.”

With a win on Saturday, Sue Bird and Diana Taurasi would make history with a fifth gold medal, which would give them the most golds of any basketball player in Olympic history.

“I think everybody here wants to win gold for them, for us, for everybody that started this streak and got us here,” Griner said. “I mean, there’s a lot of different reasons why we want to win this gold medal. So I think you’re going to see some really good basketball in that gold medal game.”

Team USA will face either France or host Japan in the gold medal game on Saturday at 10:30pmET. 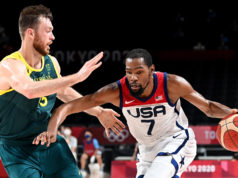