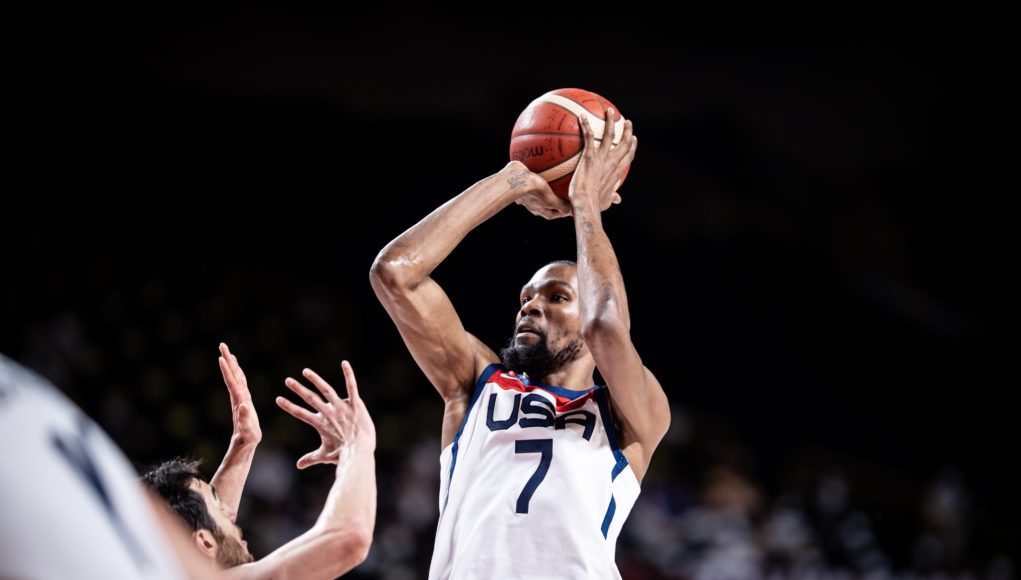 After falling to France in their Olympic play opener, the US Men’s Olympic Basketball Team got back on track on Wednesday afternoon with a 120-66 victory over Iran (0-2), getting their first win of Olympic play.

USA Head Coach Gregg Popovich made two changes, inserting Jrue Holiday and Devin Booker into the starting lineup. This led to a faster lineup that got up and down the court in transition, stretching the floor and making shots.

The Americans went 19-for-39 from three-point range with Damian Lillard dropping seven as he scored 21 points. Jayson Tatum added 14 and Zach LaVine added 13 for the USA, who faces the Czech Republic on Saturday.

“Being in the hotel, at meals, and on the practice court and just talking after that loss, we came together,” Lillard said. “It’s time to start looking like Team USA.”

The USA moved the ball well and got their shots to fall early and often. Kevin Durant, Lillard, Tatum, and Holiday all converted from deep. The Americans stepped things up defensively and allowed just 12 points from Iran in the opening quarter.

Team USA went on a 10-2 run to open the second quarter and blew the game open from there, leading by as many as 44 points at one point.

“When we defend that way, we can get out in transition, get easier baskets, not playing against the set defenses often,” Lillard said. “I think we did that from the jump tonight, and it shows in the final score.”

Booker added 16 points and Khris Middleton and Kevin Durant had 10 apiece. Keldon Johnson got into the game, scoring four points along with an assist and a rebound in four minutes of action.

“Each of these guys scores 20 or 25 points for their teams; we can’t play like that, and so we don’t,” Popovich said. “Everybody in a sense is a role player now; we don’t need heroes.”

Team USA is now 1-1 in Group A play and will return to the court on Saturday afternoon when they face Czech Republic (1-0) at 8 am ET.