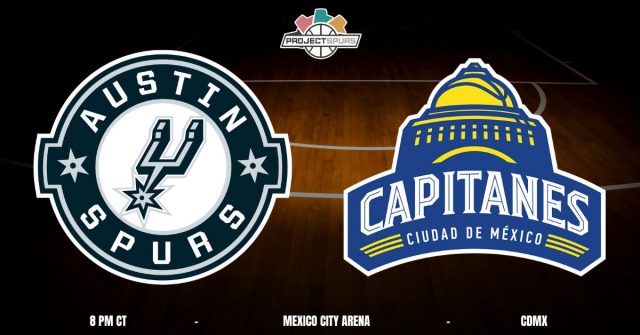 After a much-needed victory in their last game vs. the College Park Skyhawks, The Austin Spurs will travel to Mexico City to take on a talented Capitanes squad. With their last game on January 8th, the Spurs have had time to rest and recover for this next stretch of games, which includes a back-to-back in Mexico City against one of the deepest rosters in the G-League.

These two teams have already played each other this season, with both teams taking one game a piece. Austin has really shown that they can compete with some of the “big boys” of this season’s G-League, which shows the grit and determination that Austin has to succeed.

The Spurs were finally able to get back in the win column, taking down a struggling College Park Skyhawks team. Chaundee Brown Jr. seemed to have found his form from earlier in the season, dropping 29 points and 10 rebounds, once again racking up another double-double on the season.

With stars Charles Bassey, Alize Johnson, and Blake Wesley not with the G-League squad at the moment, questions were asked if Austin could continue the decent offensive production they have had this season. They had some big performances in the win on January 8th, including Dominick Barlow with 16 points and seven rebounds and guard Denzel Mahoney with 15 points and three rebounds.

They will now be matched up with a Mexico City team that went toe-to-toe with one of the most talented rosters in the G-League Ignite. Between the two previous meetings that Austin has had with Mexico City, both games were very tense and physical, almost like a new rivalry game. Austin will have a lot to prove coming into this two-game series, but can they do it against a strong Mexico City side?

The Capitanes are undoubtedly a top team in the Western Conference, coming into this contest at 5-2 since the season restarted. In their last game with the G-League Ignite, led by potential top-five pick “Scoot” Henderson, the Capitanes lost by a slim margin of 123-122, going 1-1 in that two-game series. This is a team with a lot of veteran talent, including a name that Austin Spurs fans will be familiar with.

In the loss, former Austin Spur Kenneth Faried had 25 points and seven rebounds and will look to enact revenge against his former team. Other NBA veterans on this team include guard Shabazz Napier, who was most notably with the Miami Heat, and power forward Gary Clark, who last played with the New Orleans Pelicans. Clark has been dominant this season, averaging 21.6 PPG, 10.6 RPG, and 1.7 steals per game.

It is no secret that Mexico City has a deep roster with an exceptional frontcourt, and this will once again be a tough, physical matchup. The key area for each team is to dominate the frontcourt, meaning who can be more physical on the boards and rack up second-chance points.