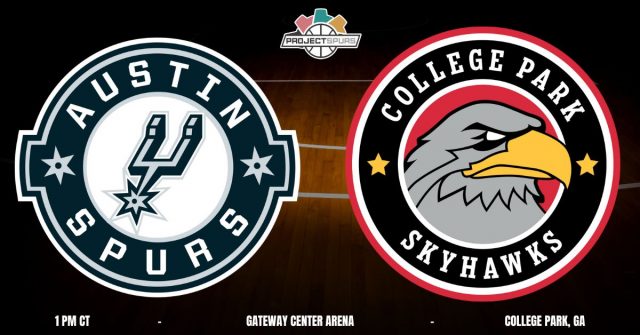 After a lower scoring 97-85 loss to the Capital City Go-Go to end the two-game series, the Austin Spurs will now continue their road trip with an interesting match-up against the College Park Skyhawks.

The Skyhawks have lost the last three games, including a hard-played two-game series of their own against the Wisconsin Herd. Both them and Austin will be looking to get out of the short-term funk and try to bounce back with a W. The Spurs will have to deal with two big losses on the roster with Charles Bassey and Blake Wesley being recalled to San Antonio. They will have to find a way to manage with the loss of two of their recent top performers.

Bassey and Wesley will not be with Austin for the time being as they have been recalled by the NBA ball-club. They have been integral pieces of this Spurs offense recently providing a bulk of the offensive production. While they are with San Antonio, players like Alize Johnson and Chaundee Brown Jr. will have to pick up much of the weight in terms of points and production in general.

In the last game, Johnson finished with 16 points and 12 rebounds, continuing to obtain double-doubles almost every night. Brown’s stats have decreased as of late, so if he can regain his form, the Spurs could be in good shape. The big question now, however, is if they can replace the likes of Bassey and Wesley both on offense and defense.

There is no question that defense has been an issue this season. Giving up 97 points to the Go-Go, however, was an improvement considering they were playing a decent Capital City team. There is a lot of work to do for Austin, but there is still just enough time to get it done in the regular season.

The Skyhawks, like Austin, have also been struggling recently. They have lost their last three games and are looking to get back to winning ways just like the Spurs. In their most recent loss against the Herd, there were some standout performers, including guard Brandon Williams who dropped 34 points.

Williams has been averaging 23 points and six assists per game and is a key figure of this Skyhawk team. NBA veteran Langston Galloway is also on the roster and so is former sixth overall pick Jarrett Culver, who is still only 23 years old. The Skyhawks also have a great six man in Cat Barber, who averages around 16 points and 4 assists off the bench. This shows the decent depth that College Park does have, and how threatening they can be on both sides of the ball.

With both teams desperate for a win to end their losing streaks, this is sure to be a great early afternoon contest. College Park’s big names will surely be a test for Austin. Alize Johnson & Co. will do their best to find their groove.