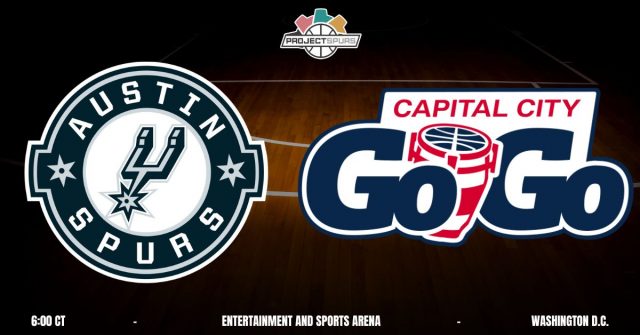 The Austin Spurs will look to get the sour taste out of their mouths as they hope to even out the two-game series against the Capital City Go-Go on Friday night. After a disappointing 128-103 loss in the nation’s capital on Wednesday, The Spurs will have to regroup quickly and hope to get the second game, which will surely be a tight and intense matchup. Capital City is currently 4-0 since the restart after the Showcase Cup while Austin is sitting at 1-2. The Spurs will have to have the memory of a goldfish and forget quickly about the loss on Wednesday in order to look forward to this game. The tip-off for tonight’s matchup will be at 6:00 P.M.

Despite the tough loss on Wednesday night, The Spurs still had some notable performances. The big one on the night was from the standout center Charles Bassey, who had 29 points and seven rebounds, leading the team in points, while Dominick Barlow had 10 points and 14 rebounds off the bench. Rookie Blake Wesley has also been continuing to grow into his game down in the G-League as he had 19 points, six rebounds, and six assists.

There has been no shortage of offense for Austin this season, but the defense has been in question for most of the games. This is an issue that still has not been addressed this season, and will continue to hurt the Spurs as the games progress. This team is really underrated in terms of its talent and physical ability, but it has to clean up defensively. The Spurs are near the bottom in terms of points allowed and that is the reason many of these games are not going their way.

The Go-Go has looked strong since the restart after the week-long Showcase Cup in Las Vegas. What really led to the victory for Capital City on Wednesday was the widespread amount of offensive production they had. The Go-Go had seven players ending with double-digit points, including top scorers Jules Bernard and Davion Mintz with 18. Vernon Carey Jr. had a decent 15 points and five rebounds. He will look to contribute more in this second game of the series. He is a man capable of dominating the boards. This makes it a great matchup against the likes of Bassey and Johnson for Austin.

The key for Capital City is to really move the ball around quickly. They play a very fast and high-tempo style of basketball. This can really take the wind out of defenses. It can be a very tough night for any team that has to face them. The Go-Go is a very strong team in the Eastern Conference. However, Austin does have the talent to take them down. Let us see how game two plays out tonight.