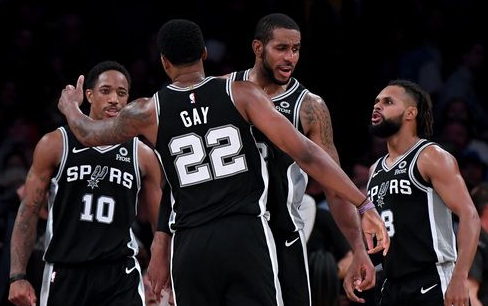 The above is a reworking of a Michael Crichton original, featured in the latest addition to the Jurassic Park/Jurassic World franchise. Jeff Goldblum’s Ian Malcolm utters the words as he once again tries in vain to convince people not to make decisions that will literally eat them alive. It may be a silly summer blockbuster but this part, at least, holds water in San Antonio.

A quarter of the way through the 2018-2019 NBA season, the Spurs are playing .500 ball. They have wins over the Warriors (at least the Sorta-iors) and Rockets.  They have losses to the Heat and Suns. They nearly beat the Bucks, and barely beat the Bulls. It’s about what you might expect from a team that is talented but negotiating a lot of roster turnover, but it’s far from the norm established over the last 20 years in San Antonio.

This was always coming.  Tim Duncan, Tony Parker, and Manu Ginobili could not play together forever. That much was understood. New successors would arrive. Transition would occur. Watching it play out over the last three summers, it becomes abundantly clear how foolhardy every attempt to predict this moment was.  No matter how many times the end of the latest era of Spurs basketball was prophesied—and it was many, many times—no one could have anticipated exactly when or how it would happen.  No one ever can.

Change sneaks up on us all. Lines that deepen in your face, hair that fades and thins until you wonder who the old person in the mirror is.  A jewel thief casing the place for months, maybe years, finally padding silently across your floor and stealing away into the night. Then one morning you wake up and what you held dear is missing.

No matter how many times Spurs fans reminded themselves—this is rare, cherish it, do not take it for granted—there is no way to prepare for the loss of something so singular.  Maybe we can never fully grasp our own appreciation of something until we are faced with the reality of living without it.

Change is like death.  Or, as Semisonic told all of us with ears in the late nineties, “Every new beginning comes from some other beginning’s end.” The lines are never really that clean; change is happening all the time, and the edges of successive eras blur and bleed into each other. A new era of Spurs basketball is beginning now—with new blood but familiar faces too—shaky, at first, but very much alive.

Change is not death. It is metamorphosis, reinvention necessary to survive. Adapt or die. As many reasons as there are to look back fondly and honor the past, there are reasons to look ahead with excitement too. If the injury bug migrates out of San Antonio, we may even get to see all of them on the floor together someday.

In the meantime, calls to “tank” are a little misplaced. Championship teams don’t just spring forth from the loins of terrible seasons, not even in the form of a number one draft pick. Some patience is required. Embrace the challenges. Let the team build, and find a way to enjoy the victories, both large and small, while they do.

Welcome to the gate.