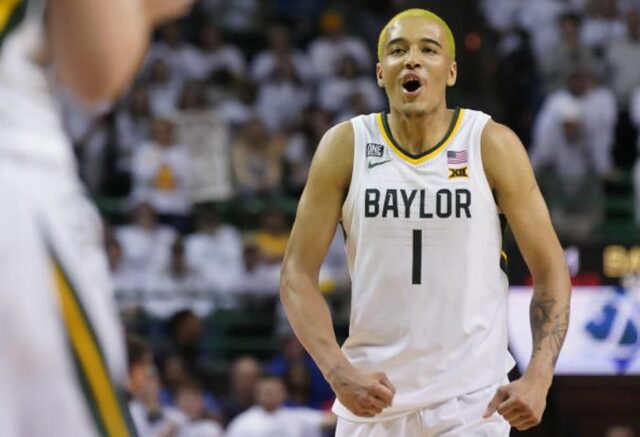 The San Antonio Spurs are still trying to compete for a play-in spot the playoffs, but have a few picks to work with in this year’s NBA Draft. One of those picks could turn into Baylor freshman forward Jeremy Sochan. The 6-foot-9, 230-pound forward has been under the radar for much of the year, but has gotten more attention in recent weeks.

He is incredibly versatile on offense and defense, albeit a hesitant three-point shooter. If he can improve on that consistency, he could be a superb player as his mechanics are already solid. He wasn’t asked to do a whole lot for Baylor though until the Bears suffered some injuries, so his numbers should reflect that. Here’s what he did in 30 games this season in 25 minutes per game.

Sochan is clearly not at his best as a shooter yet, but that can be fixed and worked on once he reaches the next level. His mechanics are fairly sound and repeatable so it shouldn’t be too tall a task for him to become a respectable shooter from the floor. However, he drives and finishes well at the rim to make up for his lack of three-point shooting.

He can be a nice rebounder since he has the size, toughness, and will to board the ball. He drives and spins well while staying on balance and tends to hit the mid-range jumpers at a steady rate. Sochan has potential to be a superb glue guy and play multiple positions thanks to his length and athleticism.

If the young Baylor Bear wants to take the leap at the next level, he will have to do more than improve his shooting. He has to become more creative with his ball handling, which will also help him create more shots for himself and others. One thing he won’t have to work on is his motor though, as that is always running at the highest gear.