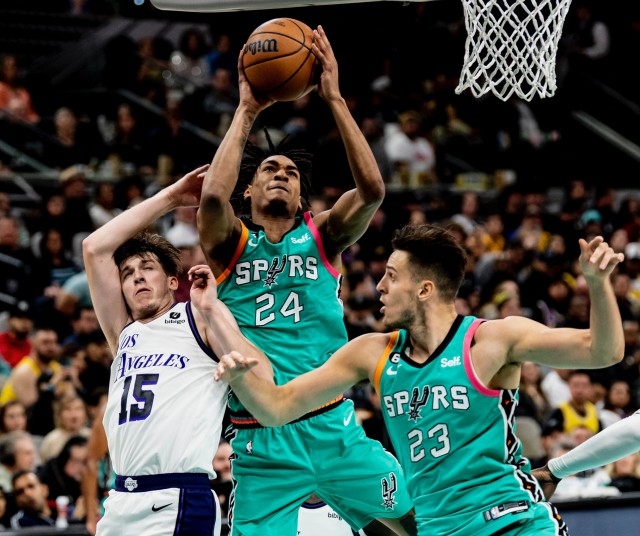 The San Antonio Spurs dropped their seventh consecutive game on Friday night, losing 105-94 to the Los Angeles Lakers, though the game wasn’t as close as the final score would suggest. With the loss, the Spurs dropped to 6-14 on the season and a 3-7 record at home. The Lakers (6-14), on the other hand, collected their fourth win in their last five games as they continue their climb out of the bottom of the Western Conference.

Spurs vs Lakers tips off at 7:10 p.m. CT as San Antonio plays host again to Los Angeles on Saturday night at the AT&T Center. The contest closes out their three-game home stand before some much-needed time off at home.

Both the Spurs and the Lakers exited Friday’s game healthy, setting up both teams in a good position to run it back on Saturday. San Antonio will likely still be without veterans Josh Richardson and Doug McDermott who both continue to be listed as day-to-day.

On the visitors’ bench, Los Angeles will miss Patrick Beverly as he serves the second game of a three-game suspension. Stars Anthony Davis and LeBron James both had questions about their status entering Friday’s contest but neither sat out. The Lakers could decide to rest either one of them for the night, for which a decision would be made closer to the game.

San Antonio didn’t enter the season with high expectations, and the team’s games over the last month reflect why. With such a young and experienced squad, however, wins come from game-over-game improvements, as head coach Gregg Popovich noted following Friday’s contest. “We didn’t make shots,” Popovich said after the game according to Project Spurs writer Paul Garcia, “but as far as defense and rebounding, we were much better, much more aggressive in the second half.”

San Antonio was excellent at cleaning the glass in the final 24 minutes, particularly on the offensive end. Out-rebounding Los Angeles 32-19 in the second half, the Spurs pulled down 14 rebounds on their end of the floor. That helped them finish strong, taking the final two frames 53-46. The team will look to carry that momentum into a quicker start in the first quarter tonight, something that they haven’t been able to do much of this season.

With James back in action for the visiting Lakers, he and Davis relatively stepped aside for much of the game, letting former Spur Lonnie Walker IV have his night in his old home arena. Walker finished the game with 18 points, 10 of which came in the first quarter. He looked more comfortable than his former teammates, connecting on 66 percent of his shots and making two of his four attempts from beyond the arc.

As San Antonio started to close the gap in the second half, the stars took over for Los Angeles. Davis and James combined for 19 of the Lakers’ 26 points in the final 12 minutes, tying the Spurs’ output as a team for the quarter. With San Antonio pulling within three points in the fourth frame on Friday night, Los Angeles will look to deliver a more complete game on Sunday night and win the season series 3-0 with one more game yet to play in January.

All stats used are from NBA.com.