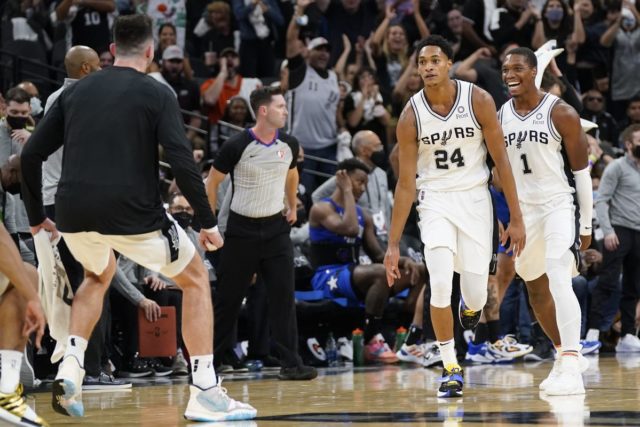 Note: This was originally recorded prior to the Thanksgiving holiday

Collin Reid evaluates his break-out candidates one month into the season to see if any of them are on track for a break-out season.

So the first one that comes to mind is usage rate. That’s pretty simple. It’s neither good nor bad. If a player has a high usage rate or low usage rate, that doesn’t really mean anything on its own. But what I’m really looking for here is, Can any of these players be a first second, or third option efficiently, because really, you need at least a first and a second option. And a lot of the time a first, second, and a third option, who can take a lot of the usage, you can take a lot of the possessions and be efficient while doing it. That’s what you need to be a championship-level offense.

So usage rate is one of the things that I’m looking at, if you think there are five players on the court in any given time, 100% divided by five is 20. So anytime a player has usage right over 20, that is an above-average usage, right. And I just spoke about being efficient on offense during that time when they’re using the possessions. And the staff that I’m using for that is true shooting. And the reason I’m taking that, as the stat that we’re using for efficiency is because it takes into account free throws, and three-pointers, counting more than just a regular two-point shot.

So with that, you kind of get a full picture of everyone’s game, or someone’s offensive game, their effective field goal percentage is pretty good as well. But it doesn’t take into account true free throw shooting. So with the true shooting, it basically is very good estimation of when this player shoots. How many points per possession is that player scoring divided by two. And that’s how you get the percentage. So a little neat trick that I learned from Ben Taylor of thinking basketball, is that with true shooting, it’s really a contextualized stat. So you don’t just want to look at true shooting and say, Oh, this player has a true shooting of 53%, you’re not really going to know if that’s good or bad on its own without looking at what the true shooting is for that season.

True shooting is not like that, we’re really comparing it to league average. And so for instance, last season, the league average was 57%. But with the new changes, and with fans back in the stands and all that true shooting has actually fallen league-wide down to 54.9%. So that’s the new average that we’re looking at there. And so really, what I care about is how these players are getting their shots, you know, how much usage do they have?

And how efficient are they in their usage? Because this first team has a lot of defensive options. You know, if they were on the path to a championship, they could easily cobble together a high-level defense but they’re really lacking that number one option not shot creator that that player who can take a lot of the usage a lot of the possessions and just be a highly efficient scorer with those possessions they’re
lacking that number one option and really they’re lacking the number two option as well.

So just kind of some research I did every championship team from the Bucs back to the Spurs. So if you look at all of them, they all had number one options for sure. Number two options for sure. And sometimes number three options that had higher than average usage right and higher than league Average True shooting, the only exceptions in that whole time.