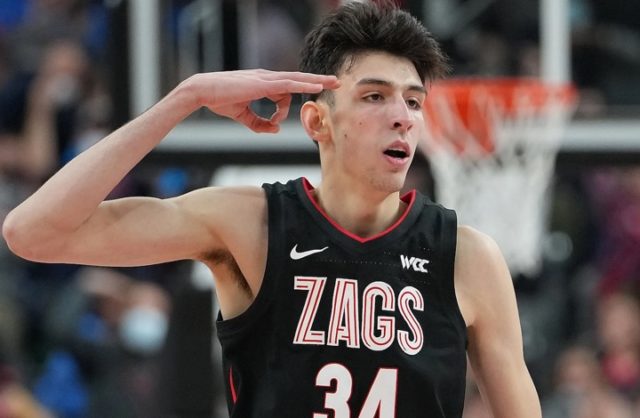 The San Antonio Spurs are not having a great time to start this season. They are struggling with just about everything, but the most glaring issue has been big man depth and the lack of playmaking from the position. There is certainly one prospect in this upcoming who could change that in 2022. His name is Chet Holmgren and he is coming for that top spot.

He has some competition with Paolo Banchero, but the 7-foot, 195-pound unicorn is the real deal. He has not been quite the featured player like Banchero, but he has had some great moments already this season. He’s a block machine with his height and wingspan, which has been delightful to watch. Here are his stats through X games.

Holmgren might be slight of build, but he isn’t soft by any means. He gets after other big men and doesn’t back down from anyone, which is certainly something the Spurs could use. He hasn’t been a featured scorer for Gonzaga since the Bulldogs have Drew Timme anchoring the paint, but Holmgren has allowed him to get a lot of easy looks because of the attention he requires.

The Minnesota native hasn’t been the star everyone expected, but Gonzaga was never going to be a place where he was going to take over immediately and stunningly. However, he has played his role on that team incredibly well and he has shown the kinds of flashes that make you comfortable in taking him with a high pick.

He’s shown that he can handle the ball well at his size, compete every possession, and defend the rim at a high level despite his weight. He not only has been an integral part of Gonzaga’s run as an early title favorite, but he has had some pretty incredible moments of his own. He had an excellent game against No. 2 UCLA with blocks against a much bigger Myles Johnson and he contained him pretty well despite the weight disparity.

Holmgren might not look like it now, but he is definitely a unicorn-type of player. He will be able to add a multitude of dimensions to a Spurs team in need of scoring across the board and on different areas of the court. He won’t fall past the third pick though so if the Spurs somehow get the fourth or fifth pick, you can expect Holmgren off the board.