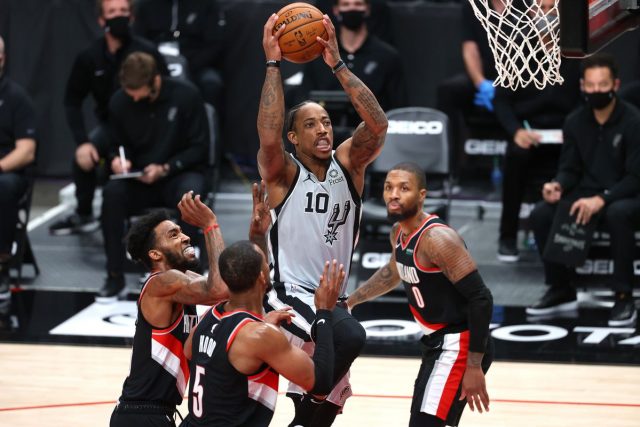 The San Antonio Spurs had five players in double figures as they earned a 125-104 victory over the Portland Trail Blazers at the Moda Center on Monday afternoon.

The win is the second straight for San Antonio, who improved to 6-2 on the road with the victory. The Spurs defeated the Houston Rockets on Saturday afternoon and began their mini two-game road trip with the win in Portland.

Here are three key moments from the Spurs’ win over Portland:

The Spurs defense stood out in Monday afternoon’s win, holding the sharpshooting Blazers to 35 percent shooting from beyond the arc. Damian Lillard did finish with a game-high 35 points but shot just 3-for-10 from three-point range.

With C.J. McCollum out, Rodney Hood did his best to fill in. He scored 21 points but did most of his damage from midrange. He, along with much of the Blazers, could not get it going from three. Much of that credit goes to San Antonio’s defense on the perimeter.

“I think that was the best the part of our game. Our weak side defense was very active,” Spurs Head Coach Gregg Popovich said.

San Antonio’s veterans came through on the road, scoring 84 of the Spurs’ 125 points. LaMarcus Aldridge had his best outing of the season thus far, posting 22 points on 10-of-17 shooting to go along with two rebounds, a block, and an assist.

Patty Mills and Rudy Gay came off the bench to add 21 points apiece and nailing a combined 10-of-15 from downtown. DeMar DeRozan paced himself with 20 points, slashing his way to the rim and finding his teammates for open shots.

“He has to make himself comfortable,” Gay said of Aldridge’s play. “He set the tone early. He got to his spots and knocked down his shots.”

Sharing the basketball was the key to the Spurs winning their fifth NBA Championship in 2014 and it could be the key to getting them back into the playoffs. The Spurs finished with 33 assists, with DeRozan and Dejounte Murray each having 11.

The Spurs are now 8-6 on the season and will conclude their road trip in San Francisco against the Golden State Warriors on Wednesday night.