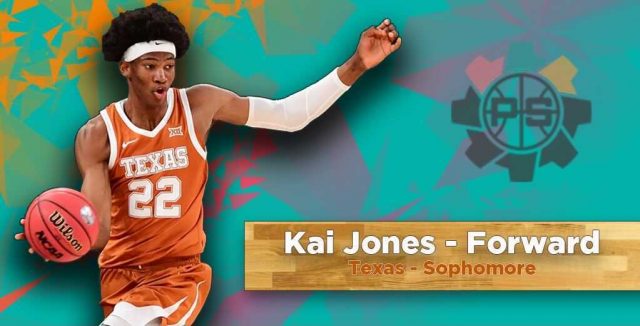 We might have just profiled his teammate, but Texas sophomore big man Kai Jones is our next prospect. The 6-foot-11, 218-pound has improved quite a bit from his freshman campaign. He’s driving from the perimeter and making more shots this year in about five more minutes of game time.

Jones is still coming off the bench for the most part, but his minutes have increased from last year. He’s been entrusted to do more on offense and has rewarded coach Shaka Smart with steady play and good decision-making. So far in 12 games this season, here are Jones’ stats.

The upside for Jones is what intrigues people most as he’s already shown the ability to take his defender off the bounce and get to the paint. He can post up a bit as well, although he won’t really be asked to do much of that at the next level. He flies around on the court, even if his rebound numbers don’t show it.

To unlock his rim protecting potential, he will need to put on some weight and hit the gym. However, he has the length you like to see in a big man like that and he moves pretty well with some wings out on the perimeter.

What Spurs fans will like most is that he likes to finish strong with a dunk when possible. On fastbreaks, on cuts down the middle, and on offensive rebounds, Jones tries to dunk and you have to love that tenacity.

Jones is not quite a lottery pick right now, but given his high motor and flashes of skill already shown, he could get there. As it stands, he is likely a late first rounder until he shows us a little more of his shooting and driving ability consistently.