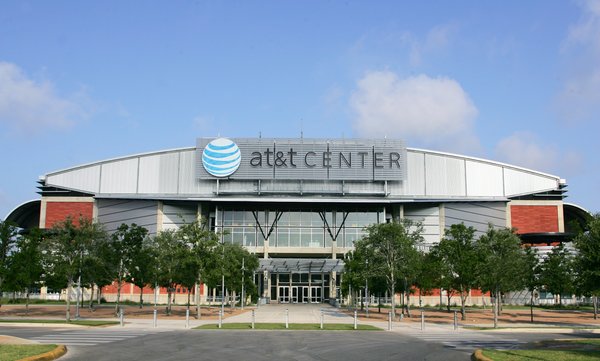 With just five days to go before the San Antonio Spurs tip-off against the Memphis Grizzlies to open the 2020-2021 season, the silver and black announced some additions and promotions in the front office across the organization.

Probably the biggest name on the press release is Danny Ferry, who the team announced will be joining the Spurs as a basketball operations consultant. Ferry is a familiar face, making his return to San Antonio after serving as the Interim General Manager of the New Orleans Pelicans during the final months of the 2019 before the organization hired current GM David Griffin. Ferry played his final three NBA seasons with San Antonio from 2003-2005 as a part of the teams that won two titles in three years, and was a member of the front office from 2010 – 2012.

Joining Danny Ferry as additions to the organization this season will be Samson Kayode and Hao Meng, the team announced Friday. Meng joins the front office from the NBA league office, and is the Director of Strategic Analysis and Basketball Insight. Kayode comes from the USA Basketball Men’s National Team, and will fill the Assistant GM position for the Austin Spurs that was left vacated by this season’s promotion of Tyler Self from assistant to General Manager of the G-League team. Additionally, Kayode will service as Director of Player Evaluation in San Antonio.

Receiving promotions within the organization are Brendan Bowman and Brandon Leibsohn. Bowman’s promotion lifts him from Medical Systems Assistant to Assistant Athletic Trainer the last three years. A five-year member of the Spurs, Bowman first joined San Antonio five years ago as a medical quality assurance assistant after spending a season with the Erie Bayhawks of the G-League during the 2-16-2017 season. Leibson’s new role with the Spurs is Manager of Basketball Strategy, which comes after serving as a basketball operations quality assurance assistant. Leibson has a background in law, having served as an associate with a firm from 2015-2019. He interned in the legal department with the Milwaukee Bucks in 2012.

So what do the additions mean?

Ferry’s new role is an intriguing fit for a Spurs team that missed the playoffs for the first time in over 20 seasons, and seeks to correct the ship quickly. His experience in helping the Cleveland Cavaliers contend from 2005-2010 as General Manager and then the Atlanta Hawks from 2012-2015 as President of Basketball Operations.

Under Ferry, the Cavaliers made their first return to the postseason under his leadership, qualifying all five seasons, including a Finals appearance in 2007 and a Conference Finals in 2009. As President of the Hawks, he notably hired former Spurs assistant, Mike Budenholzer as head coach, who would win Coach of the Year with a Hawks team that reached the Eastern Conference Finals in 2015, furthest the team has gotten since losing in Finals in 1969-70.

The addition of Samson Kayode as both Director of Player Evaluation and Assistant GM of the Austin Spurs seems to focus on building and acquiring youth for a Spurs organization that has its youngest roster during Gregg Popovich’s tenure. Kayode’s experience with the USA Men’s Basketball National Team where, according to the announcement, he primarily focused on developing the Junior National Team is a hire that can get through to young players, something that many fans believe isn’t a strength of the organization.

Another interesting note on the additions is Hao Meng, who most recently was Associate Vice President of Basketball Strategy and Analytics in the league office. With a financial background that includes a degree from Harvard and two years working as an investment banking financial analyst at Goldman Sachs, it seems the Spurs are going Moneyball and leaning heavily into analytics. It’s worked for a number of organizations across sports, and for the “old school” Spurs, this is quite the development. 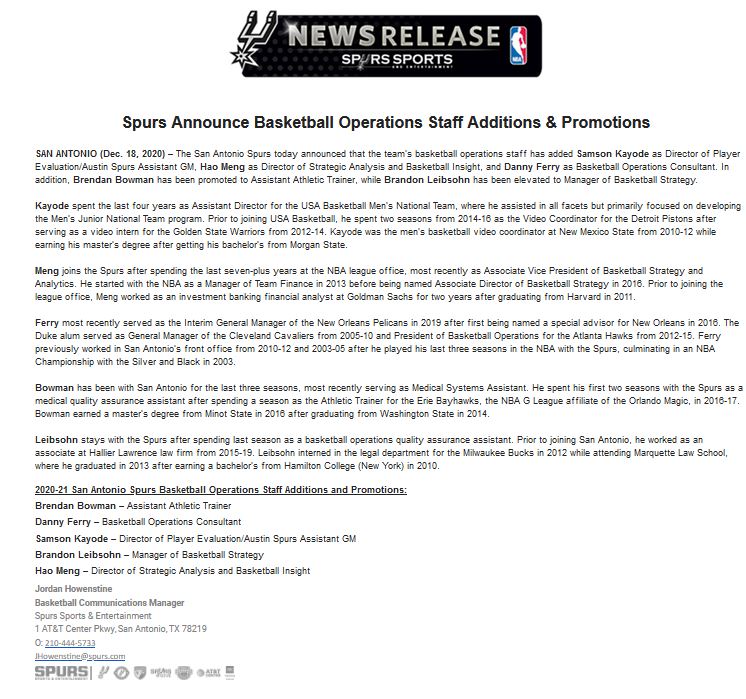