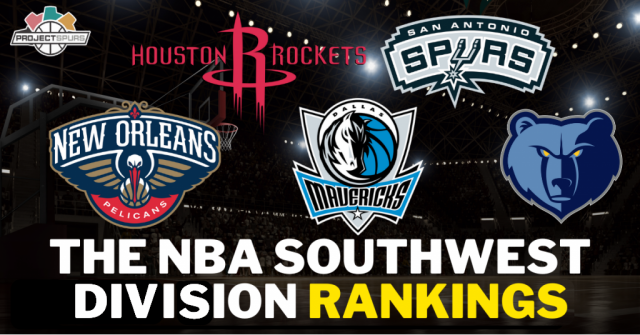 With the 2nd week of NBA action in the books, things have not panned out as analysts predicted before the season’s start. In the  NBA Southwest Division, the assumed lottery-bound San Antonio Spurs are leading the division standings at 5-2.

The pre-ordained front runners Memphis Grizzles are currently ranked 3rd in the division ranking at 4-2. Despite spectacular performances from Luka Dončić, the Dallas Mavericks are near the bottom of the division. With Zion Williamson’s return from injuries, the New Orleans Pelicans are at the top of the table with the Spurs. Leaving the Houston Rockets at the bottom of the rankings.

It’s impossible to keep up with all five teams in this competitive division so here is a recap of the week’s events for each team in the NBA Southwest division.

The Rockets started the week off right getting their first win of the season in front of their home crowd against the Utah Jazz 114-108. Kevin Porter Jr led the team in scoring with 26 points. The Rockets would then go on to lose the next three games. The Jazz got revenge in the next game giving the Rockets a 109-101 defeat. The struggling Rockets squad fell to the Trailblazers 125-111 and the Suns 124-109 by the week’s end.

They’ll be looking to turn things around tonight against the Clippers. The Rockets are currently ranked last in the Western Conference.

The Dallas Mavericks split their four games this week, two of which went into overtime. The first game was the week was a loss to division rival the Pelicans. Despite Dončić’s 37-point triple-double performance, the Mavs fell short 113-111. They were able to bounce back the next game in an overtime victory over the Brooklyn Nets. Dončić recorded another triple-double leading the team with 41 points, 11 rebounds, and 14 assists. A 117-111 overtime loss to the Oklahoma City Thunder followed in the first of back-to-back games over the weekend. Unsurprisingly Dončić led the Mavs again with another triple-double recording 31 points, 10 assists, and 16 rebounds. The Mavs ended the week with a 114-105 win over the Orlando Magic. Dončić took it easy in this game he scored 41 points but no triple-double this time.

Being led by such a superstar talent you’d expect the Mavs record to be better than .500, but their record currently stands at 3-3. They’re ranked 10th in the Western Conference and 4th in the Southwest Division.

The Memphis Grizzles started the week strong with 2 wins, 134-124 against the Nets, and 125-110 against the Kings. Ja Morant and Desmond Bane both had 38 points in the victory over the Nets. Bane led the charge against the Kings with 31 points and Steven Adams recorded a double-double with 12 points and 11 rebounds. They played the first of two games against the Jazz on Saturday, coming up short 124-123. Tyus Jones got a double-double with 23 points and 10 assists, and Bane led the team in scoring again with 32 points. The Grizzlies will have the opportunity for revenge tonight when they face the Jazz again.

With a record of 4-2, the Grizzlies finished the week ranked 6th in the Western Conference and 3rd in the Southwest Division

The New Orleans Pelicans only had three games this week, the first of which was a win against division rivals Dallas Mavericks 113-111. Trey Murphy led the Pelicans with 22 points but it was a true team effort with 8 Pelican players with double digits. Jonas Valančiūnas led the Pelicans squad against the Phoenix Suns in the next game with a double-double of 25 points and 10 rebounds. However, it wasn’t enough because the Suns won 124-111. To finish the week strong they smoked a Kawhi-less Clippers 112-91. CJ McCollum led with 22 points, and Williamson recorded a double-double of 21 points and 12 rebounds.

With a 4-2 record the Pelicans are ranked 5th in the Western Conference and 2nd in the Southwest Division.

The San Antonio Spurs played the Minnesota Timberwolves 3 times this week. Since the NBA is trying out these multiple-game series throughout the season, let’s cover the 3 games separately from the other game against the Chicago Bulls. With the first two games in Minneapolis, The Spurs outran the Timberwolves in the first game. Devin Vassell led the Spurs squad with 23 points and Jakob Poeltl had a 14-point, 14-rebound, double-double. Six Spurs players were in double digits by the end of the game. In the second game, the Timberwolves won 134-122. Keldon Johnson led the Spurs with 27 points. Josh Ricardson and Poeltl had double-doubles. The Spurs won the third game 107-98. Johnson led with 25 points, and the Spurs roster was down to only 9 players by the end of the game due to injuries and illness.

Between the second and third games in the Minnesota series, there was a game against the Bulls. Johnson led with 33 points in the 129-124 victory. During the first quarter, head coach Greg Popovich called a timeout so the crowd could celebrate former Spurs star DeMar DeRozan crossing the 20,000-point mark in his career.

The Spurs waived Guard Josh Primo on Friday due to sexual assault allegations, as of today no one claimed his contract and Primo is out of the NBA.

With a 5-2 record the Spurs are ranked 3rd in the Western Conference and 1st in the NBA Southwest Division.