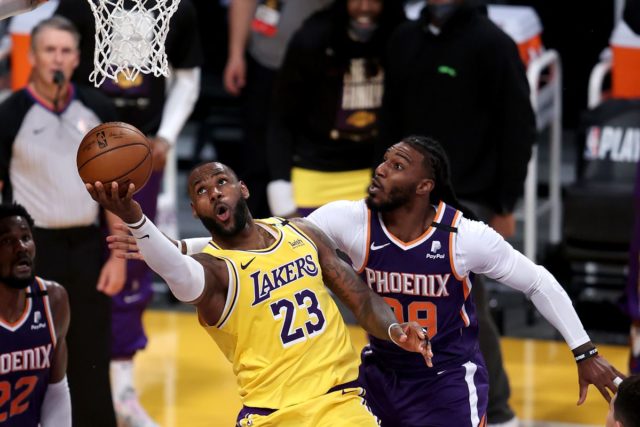 LeBron James said he joined the Los Angeles Lakers to playing “meaningful playoff basketball” in front of Lakers fans and Thursday night he finally got his chance.

James scored 21 points and dished out nine assists as the Lakers held off a late rally from the Phoenix Suns to earn a 109-95 victory in Game 3 of their Western Conference first-round series at the Staples Center to take a 2-1 series lead.

“It’s a beautiful thing,” James said. “It was a special night, and we just tried to reward our fans for the loyalty they have for us, and just try to play the game the right way.”

The seventh-seeded defending champions used a suffocating defensive performance to take a 21-point lead in the second half. Phoenix rallied but both Devin Booker and Jae Crowder were ejected from the game, stopping the Suns’ comeback attempt and giving Los Angeles the win.

Anthony Davis had 34 points and 11 rebounds to lead the Lakers while Dennis Schroder added 20 points.

Meanwhile, it has been a struggle for the young Suns squad since their victory in Game 1. Deandre Ayton had 22 points and 11 rebounds and Booker chipped in 19 points on 6-of-19 shooting before his ejection for a flagrant foul against Schroder.

Chris Paul’s shoulder injury is bothering him and it’s starting to show in his on-court performance. He had just seven points and six assists in 27 minutes, playing just two minutes in the fourth quarter.

“It wasn’t a close game, but we got it in reach,” Suns Head Coach Monty Williams said. “And in those moments, all of our guys know we have to be better, and our guys agree.”