Team USA is now tied for second place with nine points along with Germany in Group B play after their 4-2 win over host team Latvia today in the IIHF World Championship.

As reported yesterday, Canada is in sixth place in Group B after picking up their first three points in their sole preliminary round win against Norway. They’ll likely have to win out in their next three matches to advance to the playoffs.


Canada won 4-2 against Norway yesterday in a must-win game, led by Connor Brown and Adam Henrique.

Today USA beat Latvia 4-2, as they were led by Trevor Moore and Bryan Boyle, who had one goal and an assist apiece.

Boyle, who is the oldest player on Team USA at 36, earned Bast Player of the Game honors.

“The message that we’ve had, we’ve executed,” Boyle said. “We’ve tried to get better each game. With 13 forwards and 7 defencemen, you have different guys playing with different people, but we’re a hard-working team and play above the puck. We’ve tried to earn our offence, and it’s paid off for us.”

The Americans got the scoring underway almost immediately, as Matt Tennyson found the net at 1:06 into the first period.

After USA picked up a few penalties, Latvia’s Miks Indrasis responded with his own score, but Boyle answered back later in the period.

USA and Latvia were all tied up at 2-2 at the end of the first period, but Team USA scored an additional two goals in the second quarter and kept Latvia scoreless till the end of the match.

Moore’s goal in today’s game was his fourth of the tournament.

“It’s cool,” Boyle said. “We’ve won some games here; we get to see our flag go up and sing our anthem. It’s a proud team in there. We obviously all have a lot to play for, but living in the country we do, with the opportunities we’ve had, we’re so fortunate. It’s certainly a blessing to be able to play.”

Both teams have three remaining games in the preliminary round. All games streaming on PremiumTV.

Team USA getting ready for the next battle 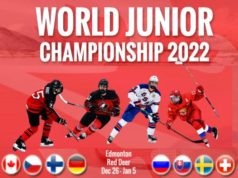 The 2022 World Juniors cancelled due to COVID-19 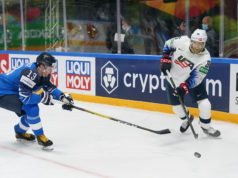 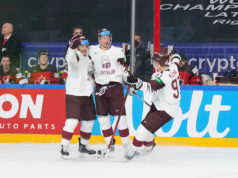