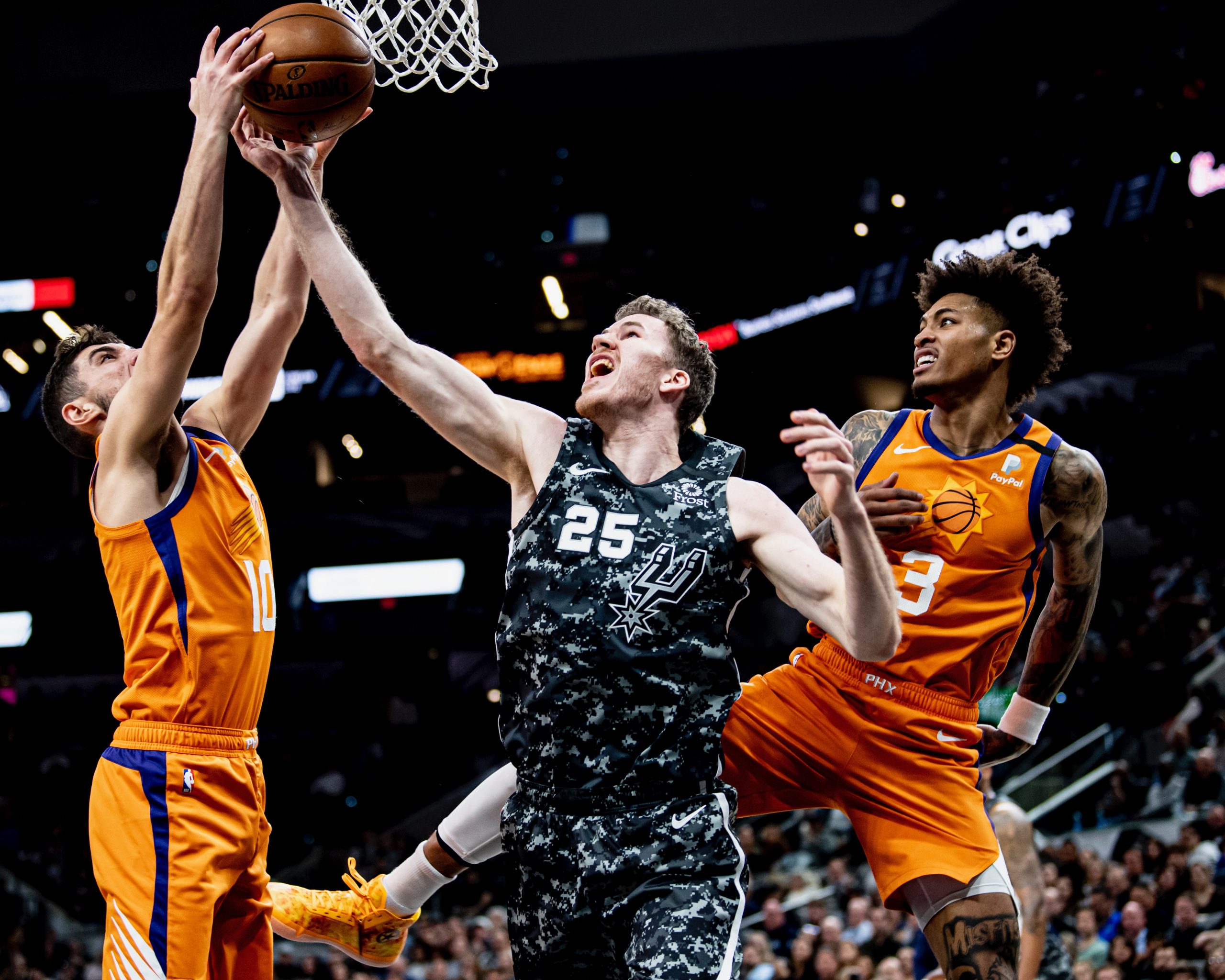 Leading up to the trade deadline, speculation of the Spurs trading away LaMarcus Aldridge, Rudy Gay, and DeMar DeRozan intensified. These trade rumors split opinions; some fans may be disappointed that they did not take the chance to gain assets to improve their team’s future. However, in the past week reports suggested another Spur may have been available – Jakob Poeltl.

In his case, Spurs fans will be universally relieved that the rumors did not come to fruition. Poeltl is both a valuable contributor to this season’s Spurs team and a potential quality starting center for the next several years.

Will the Spurs Keep Poeltl in Free Agency?

Poeltl enters restricted free agency this summer, meaning the Spurs can match a contract offered by another team to keep him. Paul Garcia summarized the options for the Spurs and Poeltl at the season’s start here.

Poeltl has already proven himself as a high-quality backup center and has been capable as an occasional starter. At 24 years old, he should have a few years left of slight improvement before hitting his peak.

On the other hand, centers have been plentiful and affordable on the free-agent market. The Spurs might be reluctant to match a large contract if a player with 90% of Jakob’s ability could be found for a minimum contract.

The teams that could swoop in for Poeltl’s signature this summer would be those with salary cap space and a need for a young center. Such a team might be willing to overpay slightly to deter San Antonio from matching their offer in order to secure Poeltl’s combination of certainty and upside.

Fortunately for San Antonio, Atlanta and Cleveland have taken themselves out of the running with trades for Clint Capela and Dewayne Dedmon (Atlanta) and Andre Drummond (Cleveland). This leaves the Charlotte Hornets as the only likely competitor, so the Spurs should be relatively confident they will be able to retain the young center.

Most centers’ primary value to their team is on defense, and Poeltl is already a solid contributor on that end. He is a more mobile big man than Aldridge, a valuable attribute in the pick-and-roll heavy league. The Spurs’ defensive rating with him on the floor is only average, but sharing many minutes with players like Patty Mills and Marco Belinelli increases the burden on Poeltl. Both the stats and the eye test suggest that his rim protection is well above average – his 3.2 blocks per 36 minutes is 6th in the NBA among regular rotation players.

Poeltl is more than just a highlight-generator; he is 13th in the league in limiting opponent field goal percentage at the rim and in the top 10 among rotation centers. He is not an explosive athlete, but his footwork and positional sense allow him to stay in position to effectively contest shots, even against quick ballhandlers:

As a help defender, he times his rotation to contest shots without opening up an easy passing lane to his man:

Despite his physical presence at the rim, Poeltl generally avoids fouls; among the 71 players with over 1.5 blocks per 36 minutes, he has the 17th-lowest foul rate. His agility and reading of the game allow him to contest shots with positioning and verticality:

These defensive instincts set Poeltl apart from many other young centers and have helped him make valuable contributions throughout this up-and-down season.

If the Spurs keep Poeltl on the roster, he will need to prove his ability to maintain his performance against starters, not just against bench units. While his footwork is good, he is not quick enough to be a frequent switch defender, but Popovich generally prefers to have his bigs drop back against picks. As Murray, White, and Lonnie Walker IV earn more playing time, their strength at getting over screens will complement Poeltl’s ability to defend the rim very well.

For Poeltl to be an above-average starter, his rebounding instincts must develop to match his rim-protecting IQ. His defensive rebounding rate is middle of the road, despite normally matching up against backup centers. The team’s defensive rebound rate drops when he is on the floor. Lineups with two big men are coming back in vogue, and losing the rebounding battle can effectively take the Spurs out of the game against good teams as their recent loss to the Lakers showed.

If Poeltl continues to build on his already solid defensive performance, he can be a very good defensive center. While he’s not the next Rudy Gobert, lineups with Poeltl and some combination of players like Murray, White, and Walker, and Lyles could be a cornerstone of a good – even great – Spurs defense.

This season, Poeltl has been an effective if unspectacular part of the generally successful Spurs’ second-unit offense. With him as a screener in the pick and roll, the Spurs score an excellent 1.27 points per possession – in the 79th percentile of screen-setters. While not a high-flying finisher, Poeltl is a crafty scorer around the rim, and has great hands to catch passes in tight spaces:

Poeltl doesn’t attempt to be a stretch center, avoiding even midrange jump shots. On the bright side, his 53% mark on floaters and short midrangers gives him scoring versatility when he can’t get all the way to the rim – despite his stroke roughly resembling a shotput attempt:

As a non-shooter who won’t bulldoze defenders like the best post scorers, Poeltl won’t become a team’s primary or secondary offensive weapon. He will require lineups with good shooters to avoid congestion in the lane. However, he can be an important role player on a good offense because of his perception of gaps in the defense and quick decision making.

The Spurs are showing signs of moving towards the more fluid offense of the 2012-14 era, a style that requires players to read the defense and improvise as a unit to exploit the gaps opened by their movement. Here Poeltl shows off his decision making on the move – he knows what pass to make before the ball hits his hands, then uses his body to clear a lane for Lonnie Walker’s drive:

The Spurs hope that their whole young core can demonstrate this type of intuitive understanding, changing direction on the fly to find open space:

While Poeltl does not project as a future All-Star, he can be a key part of the Spurs’ effort to regain the principles that drove their success a decade ago: smart, selfless, constantly moving offense and tough, intense defense. He is already a very good defender, and has the skills to fit in an offensive system that demands quick reads and decisions.

The Spurs did well to retain him at the trade deadline and will hope to do so again in free agency. Both individual and team will have to improve, but there is good chance that Poeltl will be a significant part of a brighter future for the San Antonio Spurs.