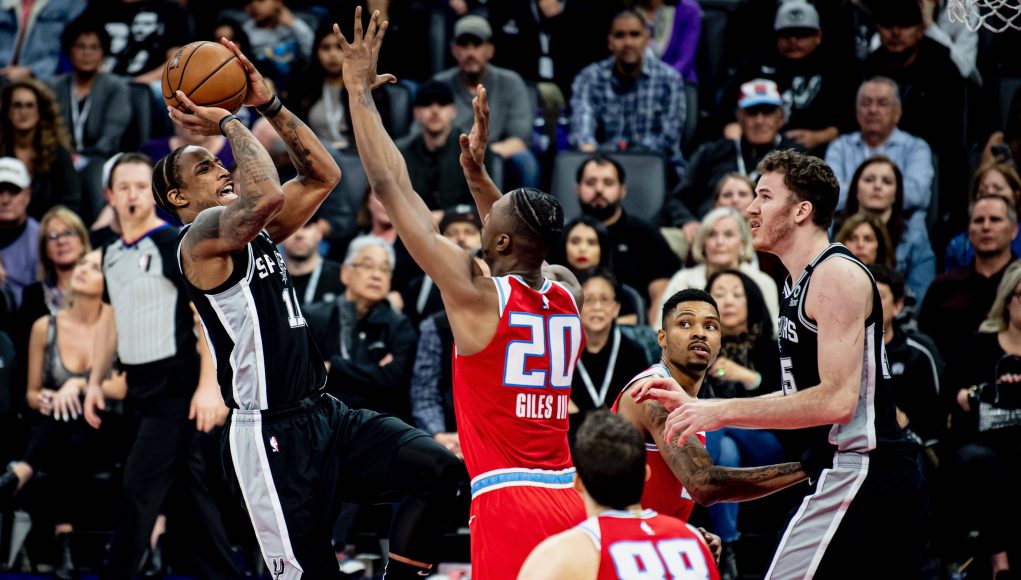 The San Antonio Spurs saw their Rodeo Road Trip woes continue on Saturday night as they suffered a devastating 122-102 loss to the Sacramento Kings (21-31) at the Golden 1 Center.

The loss is the fourth straight for San Antonio, who hit the halfway mark of their eight-game Rodeo Road Trip.

Once again, San Antonio saw things turn in the second half as the Kings ended the third quarter on a 17-2 run, including a stretch of three consecutive three-pointers.

“Those guys have to man up and play better,” Spurs Head Coach Gregg Popovich said. “That’s the bottom line.”

DeJounte Murray nearly had his first career triple-double in the loss as he finished with 17 points, nine rebounds, and nine assists. DeMar DeRozan and LaMarcus Aldridge combined for 26 points, while Bryn Forbes added 16 points.

Sacramento came out of the locker room and won the third quarter 37-29. Buddy Hield led the Kings with 31 points and shot a sizzling 90 percent (9-of-10) from deep. Harrison Barnes added 25 points and Nemanja Bjelica had 15 points for the Kings, who won their third straight.

The Spurs could not take care of the basketball in that third quarter as they committed five turnovers resulting in 11 Kings points. With each 3-pointer made, the louder the Golden 1 Center crowd got, and the more San Antonio got frustrated. DeRozan was so upset he got two quick technicals in the fourth quarter and was ejected from the game.

“It’s beyond old,” DeRozan said of the team’s losing streak.

Outside of Murray and Forbes, the Spurs were cold from three going 7-for-24. Aldridge, Trey Lyles, Rudy Gay, Lonnie Walker, and Derrick White shot a combined 1-for-11 from beyond the arc. Compare that to Sacramento’s 19 makes from 3-point range, led by Hield’s nine, that was the ballgame.

“I don’t know how to assess it,” Aldridge said. “They whooped our butt basically.”

The Spurs are now 23-30 on the season and will return to the court on Monday night when they take on the Denver Nuggets (37-16) at 8 p.m. from the Pepsi Center.