During the 2017-18 season with the Denver Nuggets, Trey Lyles attempted 218 three pointers and he shot well above league average, by sinking 38.1% of those attempts. The following season, Lyles got 18 fewer attempts, but this time he managed to knock down just 25.5% of his shots. As I was looking at Lyles’ data, I began to ponder this question: Did Lyles have an off year last season from three or should the expectations of his accuracy from three be lowered?

As Lyles gets ready to begin his first season as a member of the San Antonio Spurs team in October, I dug through the data and film to see what my conclusion to that question could be.

Let’s first begin by looking at the most frequent place Lyles likes to shoot from. As you see from his shot charts over the last two seasons, that area is primarily from the non-corner three and it’s mainly from the left-wing area. 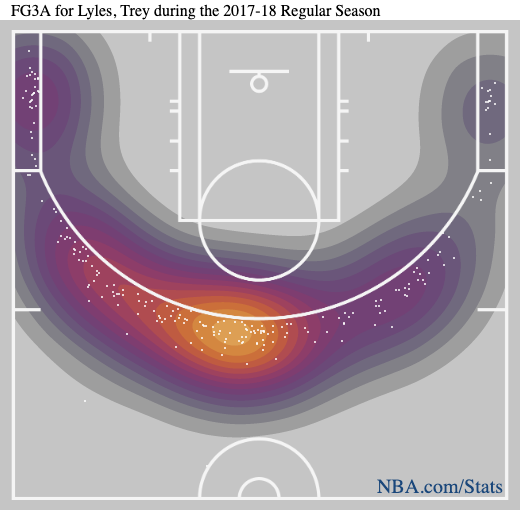 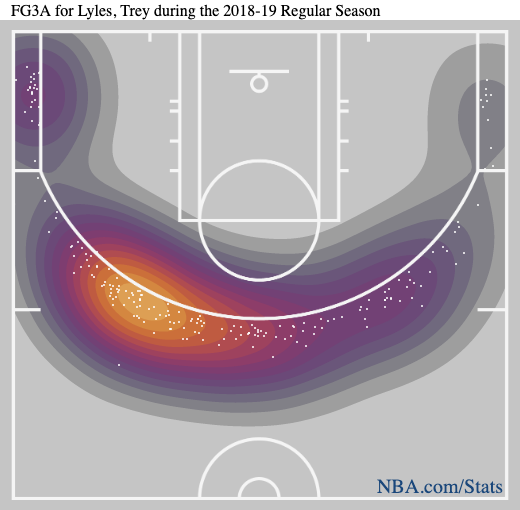 Next, the table below shows Lyles’ frequency and accuracy from the non-corner three, as well as his percentile among bigs for that season, per CleaningTheGlass.com.

From looking at the four seasons of data, we learn that Lyles typically isn’t a strong three-point shooter outside of the 2017-18 season, when he nailed 39% of those attempts and that placed him in the 77th percentile. Last season was also his worst three-point shooting season from that area of his career, so the safest window is to view him as a low 30s percentage shooter from that area with the ability to get hot for a season.

On offense, Lyles is primarily a spot-up three-point shooter who is out there to provide spacing and draw the man guarding him out of the paint. Here were some of his open and wide-open numbers according to NBA.com/stats.

On open three pointers, Lyles is almost like a roller coaster. He went from 47.6% in his rookie year on a very low attempt amount to 21.4% the following season, on a slightly increased amount. The same good then bad sequence followed in the next two seasons, though the attempts increased to at least over one per game. Overall, it’s best still to view him as a 34.1% three-point shooter on the open attempts. When it came to the wide-open attempts, there was a similar high to low pattern, though the highs weren’t ever over 40%. Once again, the safest pick on wide open threes is to view him as a 34% three-point shooter.

When diving into the specific areas above the break, I wanted to focus on his last two seasons. Here’s what the data shows.

When it came to the left wing and middle areas, Lyles once again had one strong season, then regressed. When it comes to the right wing three area, he wasn’t a strong shooter from that area over the last two seasons. The biggest takeaway is once more to view him closer to a low 30s percentage three-point shooter from the left wing and middle areas.

The last set of data comes from BBall-Index.com, where they use grades to evaluate how a player performed in different areas. Here, the focus will be on Lyles’ perimeter shooting grades.

As you can see, Lyles once again follows a roller coaster style pattern even with the grades model. The C+ career grade is the best way to look at him when it comes to his perimeter shot, with the potential for him to reach a B+ grade for a season.

When it came to watching film, one of the main observations I saw over the last two seasons on Lyles’ makes were that they mainly came from his spotting up in the 1-2 shooting formation, rather than the hop formation. The 1-2 gather is when a player catches the ball and steps into his shot with one foot already planted on the ground. The hop formation is when a player hops into the catch on two feet and then uses the motion to jump like his legs are a spring. As far as the misses, they were either short and hit the front of the rim most times, or long and hit the back of the rim. They typically weren’t the type of shots that swirled in and out.

One of the final factors I wanted to explore was whether injury played a factor in his drop in accuracy last season. According to Rotoworld.com, Lyles did suffer a right wrist sprain in mid-January. However, even before the injury, Lyles had already been struggling to knock down shots from October to December. He then suffered a strained left hamstring from late February to mid-March, and when he was ready to return to the court, he didn’t have a role or minutes available to him anymore.

With San Antonio, Lyles won’t be guaranteed a role or minutes each night, so he’ll have to earn those primarily with his play on the defensive end of the court. During his career, he’s consistently graded out as a B level interior defender. Focusing on defense first will help him earn minutes under Spurs Head Coach Gregg Popovich. On offense, the Spurs will need his floor spacing ability, but the expectation shouldn’t be to view him as a B+ three-point shooter like he was during the 2017-18 season, but instead, as a C+ level shooter, like his career average indicates.

If Lyles is viewed in that C+ view, then there’s always the chance he can go to another level like he did during the 2017-18 season. Another X-Factor that can’t be quantified is he’ll now be working with one of the best shooting coaches in the NBA in Chip Engelland. Perhaps Engelland can help Lyles get back that that B+ level and potentially crack the A range.