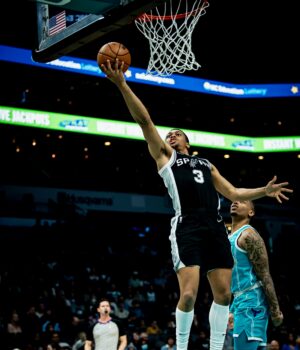 The San Antonio Spurs were back on the road Saturday night as they were in Charlotte to face the Hornets but suffered a narrow 123-117 loss at the Spectrum Center.

The loss was the fourth straight for San Antonio, who remain two wins shy of giving Head Coach Gregg Popovich the record for most all-time wins in the regular season and making him the winningest coach in NBA history.

“They played hard enough to win, they competed well enough to win. Just the end of quarters are still a learning situation for us,” Popovich said.

Here are three points from the Spurs’ loss on Saturday in Charlotte:

As Pop said, the San Antonio Spurs have grown over the course of the season but their main problem is closing out games. With Saturday’s loss, the Spurs are now 0-33 this season when trailing after three quarters.

The game was close all night long but Charlotte edged out the Spurs 24-20 and held on to grab the win.

Spurs rookie Josh Primo got some valuable learning experience in Saturday’s game and that will likely go a long way towards his development over the course of his career.

The 18-year-old finished with 10 points, six rebounds, two assists and shot 57 percent from the field. He played 25 minutes, playing all but one minute in the fourth quarter.

“He might make a mistake here or there, but everyone makes mistakes,” Popovich said of Primo. “There’s nobody on the team who doesn’t make mistakes, including me. Every minute he is on the court, it really elevates his ability to be a good player in this league.”

After being pulled in the fourth quarter of the Spurs’ loss to Sacramento, Keldon Johnson rebounded from a poor outing and displayed why he is such an important piece to this rebuilding San Antonio squad.

Johnson finished with a game-high 33 points to go along with eight rebounds and shot 58 percent from the floor. Combine that with Dejounte Murray’s 25 points and the Spurs nearly got out of Charlotte with a win.

“Keldon was great tonight. Not just because he scored, but he was solid on defense and just played a really consistent game,” Popovich said.

The San Antonio Spurs are now 24-40 on the season and will return to the court on Monday night to open up a seven-game homestand starting with a visit from the struggling LA Lakers at 7:30 p.m.