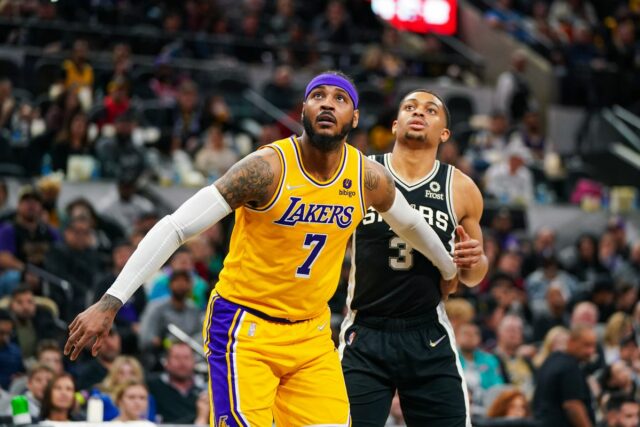 The victory moved San Antonio within a half-game of the Portland Trail Blazers and one game away from Head Coach Gregg Popovich breaking the all-time winning record as a coach.

Here are three points from the Spurs’ win over the Lakers on Monday:

While the LeBron-less Lakers struggled, the San Antonio Spurs got some big contributions from two newcomers to edge out Los Angeles.

Josh Richardson had 18 points in his first start in place of Devin Vassell. He finished 6-of-12 from the floor and connected on four of his five three-point attempts.

Romeo Langford came off the bench to score 13 points as he and Richardson combined for 31 points.

“They were aggressive offensively,” Popovich said. “They feel comfortable out there. I don’t know what happened to Romeo, but they said he couldn’t get back into the game. I’m not sure what the problem was.”

With the Lakers playing small, the Spurs’ big man took advantage of that to overcome a slow start.

As mentioned above, the victory moved Popovich one win away from passing Don Nelson for the most wins by a head coach in NBA history. Pop will try to pass Nelson when the San Antonio Spurs hosts the Toronto Raptors on Wednesday night.

“You guys know Pop. I don’t think he really cares about stuff like that,” Poeltl said. “Didn’t even really get mentioned. I doubt it will get mentioned when we get the next win. It’s just how he is. It’s really impressive, though.”