Dejounte Murray has been mired in controversy since being traded to the Atlanta Hawks in July. Between dissing the San Antonio Spurs in his Instagram comments to highly aggressive pro-am play, fans have had enough and they are speaking up.

Here’s how we got here.

Dejounte Murray Traded To The Hawks

When the 2022 All-Star was traded, San Antonio were disappointed. It was a decision that made sense on paper; trade the All-Star before his contract is up and prepare for the next era. Spurs fans thought Murray was gonna be a part of leading the Spurs back to glory.

SAN ANTONIO I LOVE YOU FOREVER…..🖤 Thank You @spurs And The Whole City For Believing In Me And Embracing Me From DAY ONE. I Want To Write A Whole Book But It’s Not Easy. We Are Family And Its Always Going To Be Bigger Than Basketball!!! pic.twitter.com/wMrmZanTbj

Parting ways with him and Lonnie Walker IV was considered “smart” in basketball business terms, but hurt in a personal way. There were heartfelt goodbyes including a sincere post from Murray and fans wished him good luck in Atlanta. If only it had stayed that way.

“I feel FREE I feel WANTED”.

For Spurs fans, this one stung a bit. Spurs fans who tried to push Murray into the 2022 NBA All-Star Game flooding Twitter with votes before he was ultimately tapped to replace Draymond Green on the roster. These words from the player that hugged Head Coach Greg Popovich after games – the player that congratulated him in the locker room as Popovich became the winningest coach in NBA history. It seemed out of character for most fans.

Some fans took it upon themselves to respond to Murray on his Instagram and the former Spur responded. “The Way That System Set Up You Gone Be Losing For The Next 15 Yrs!!!,” he wrote, “Problem Bigger Than Basketball”. 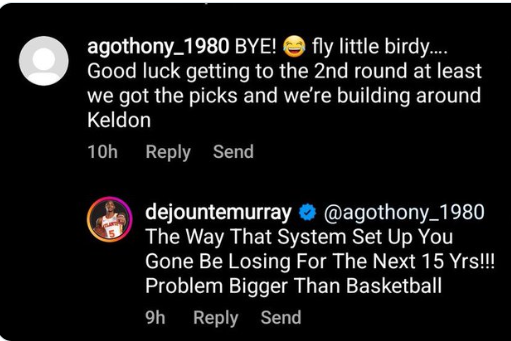 15 years? That’s just disrespectful. Murray still has friends on the Spurs roster. He and Keldon Johnson have been friends since they started playing together, and Murray thinks he will be ineffective? This got quite the response from “Spurs Twitter”.

“My goal is to root for the Spurs over their next 15 years with all those bigger than basketball problems,” wrote one fan in the comments of a tweet from Murray this summer. The “15 years” continued to be a theme as others shared their hurt as well.

Videos from Murray’s pro-am games have started making the rounds, and let’s just say it’s strange to see. There are cameras at these games between professionals and amateurs. Chances are, if you get into a physical altercation with an NBA star, your chances of making it to the Association will dwindle. It wouldn’t take much imagination to see that if Murray had pulled these antics in a street game, however, it would have led to a fist fight.

From shoving a ball an amateur’s face while they are on the ground to literally hitting another one with it, it has been a bit much. The latest incident of Murray’s antics, however, have left the court and returned to playing out on social media.

Great coaches always encourage their players to save it for the game and leave it all on the court. Murray had other plans. In a pro-am game against the top pick of the 2022 NBA Draft Paolo Banchero, Murray became angry with the rookie. On one particular play, Murray was being guarded by Banchero. Off of a pump-fake, he tried to trip Banchero before executing an off-the-backboard dunk worthy of the dunk contest. Murray then yelled at the rookie, throwing the ball past him before going to the bench to talk trash.

After the game, Murray unfollowed to soon-to-be NBA rookie on Instagram. That didn’t stop both players responding to each other on their Instagram stories, however. Banchero noticed that even though he was unfollowed Murray had posted the trip and dunk on his Instagram stories. He posted a screenshot with his own caption calling Murray out for unfollowing him and needing to call double-teams against him.

Murray responded on his own Instagram stories saying that making it to the NBA changed Banchero. The Magic rookie later responded back to Murray, saying he was just showing off for the internet. In the end, the Hawks guard seems to know that he was being disrespectful to Banchero because he posted the play as a post on his Instagram with the caption, “WELCOME TO THE BIG LEAGUES!!!!!! Disrespectful They Said….. 🤷🏽‍♂️ Yeahhhhh I KNOW!!!!!!!!”.

It seems weird to see a six-year league veteran who never played in a playoff game stunt on a rookie and dragging things into the public sphere. Still, it’s also somewhat refreshing. The plays where Murray is hitting non-NBA players in the head may be crossing the line. Still, the back-and-forth is reminiscent of the days of great NBA player rivalries. The NBA regular season schedule is slated to be released soon. Many fans around the league will surely be setting reminders on their calendar for when the Hawks play the Magic.