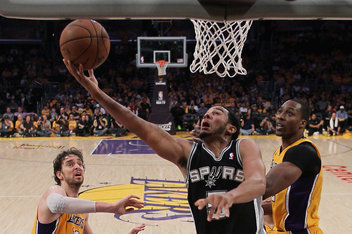 36-point blowout in Game 3.
Joseph, San Antonio's other 2011 first-round pick (the other being, of course, starting small forward Kawhi Leonard) didn't have much space in Gregg Popovich's minutes ledger, though he readily accepted an expanded role with the Spurs' D-League affiliate, the Austin Toros, to acclimate himself to the NBA game,
But, still. Inheriting a spectator role, save for a few choice low leverage scraps, didn't take the sting away from dropping two consecutive elimination games in the NBA Finals.
Via Real GM:
“It was good, a great experience," Joseph said. "Obviously every possession counts. Look at what happened in Game 6.
“We were upset. We let one slip away from our hands. We were right there in Game 6, a couple plays away [from the championship]. It is what it is, the ball falls that way sometimes. We played good, just a couple plays didn’t go our way.”
Like, say, a Tim Duncan running hook over Shane Battier that caromed off the back side of the rim? Yeah, that one.
“Yeah, he thinks about it," Joseph said. "He’s got a lot of other things to worry about right now of course.
“He has a lot going on in his life right now. I hope everything is well for him.”
There is some good news — Joseph is vying for a roster spot on Canada's senior men's basketball team, and he could potentially be at the forefront of a promising era of Canadian basketball, including presumptive 2014 No. 1 overall pick Andrew Wiggins and Cleveland Cavaliers power forward Tristan Thompson, among others. The Joseph family tree is only expanding, though — Joseph's brother, Devoe Joseph, and cousin, Kris Joseph, are both attending Canada's training camp.
The only downside? It's just hard to find your water bottle.
"To have blood here with me, it’s great, it’s amazing," Joseph said.  "When you have three Josephs on one roster, it’s amazing. I was looking at the water bottles today and I was saying they need to put our first names. Looking at the bottles from an angle, all I could see was “Joseph Joseph Joseph!” I couldn’t see the “C” on the other side. They need to put our first names instead of our last names on our jerseys."