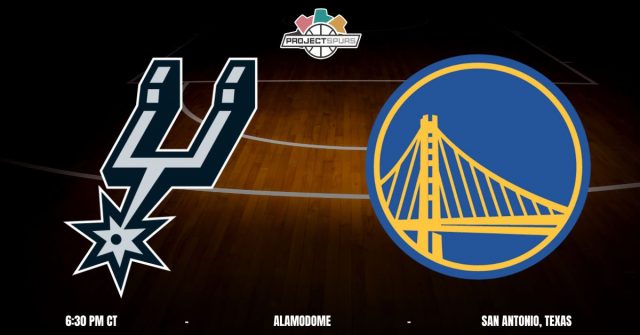 The San Antonio Spurs will take on the Golden State Warriors tonight in a special Alamodome face-off. The last time the Spurs played in the Alamodome Steve Kerr was in a Spurs Jersey alongside Tim Duncan and David Robinson. Now, Kerr will be on the opposing side of Greg Popovich coaching the Warriors in the Spurs’ 50th Anniversary game.

The Alamodome is currently home to UTSA’s football team and the annual Valero Alamobowl game seating up to 65,000 people. This was home to the San Antonio Spurs for nearly 10 years from 1993-2002. However, in the Alamodome’s NBA heyday, the stadium was limited to under 35,000 seats. The arena was essentially split with a huge curtain covering the remaining 30,000 seats.

With the curtain removed, the San Antonio Spurs were able to successfully break the NBA’s attendance record for a regular season game.

The @Spurs will break the all-time NBA regular season attendance record tomorrow vs the Warriors. So exciting! Thrilled to witness it. #GoSpursGo pic.twitter.com/6RkAeDu60V

How to Watch Spurs vs. Warriors

The San Antonio Spurs and Golden State Warriors are both currently on a three-game losing skid. However, the Spurs do not have an NBA superstar that they can lean on as the Warriors do in this game. Despite the lackluster 13-29 Spurs record, this team has contested in close games against some of the best teams in the NBA. The Warriors will need to bring their “A” game if they want to stop the momentum of 60,000-plus fans backing the home team.

The San Antonio Spurs are coming off of a two-game series against the Grizzlies. Unfortunately, the team fell short in both of their games. With Devin Vassell out, the Spurs take a big hit when it comes to scoring and depth. Luckily, Tre Jones has come up huge for San Antonio. Jones was the scoring leader over the two games for the Spurs combining for 40 points. These are not crazy numbers by any means with the endless talent around the league. However, Tre Jones has cemented himself as the floor general in San Antonio in his third season. Jones will be a big factor in this game. His ability to not only pass but also score will give us a great matchup between point guards.

The Warriors are coming off of a 125-113 loss to a very injured Suns. However, this was Steph Curry’s first game back after missing 11 straight due to injury. Although Curry was able to put up 24 points, you could certainly see that he was not in his groove just yet. Andrew Wiggins is another Warrior who has just returned from injury. Wiggins has played in two games, however, he has yet to score more than 12 points in his return. Wiggins was out of competition for a whopping 15 games over the course of the last month, and he exploded for 36 against the Rockets right before his absence. If the Warriors want to secure the W, the returning players will need to shake off the ring rust in the dome.