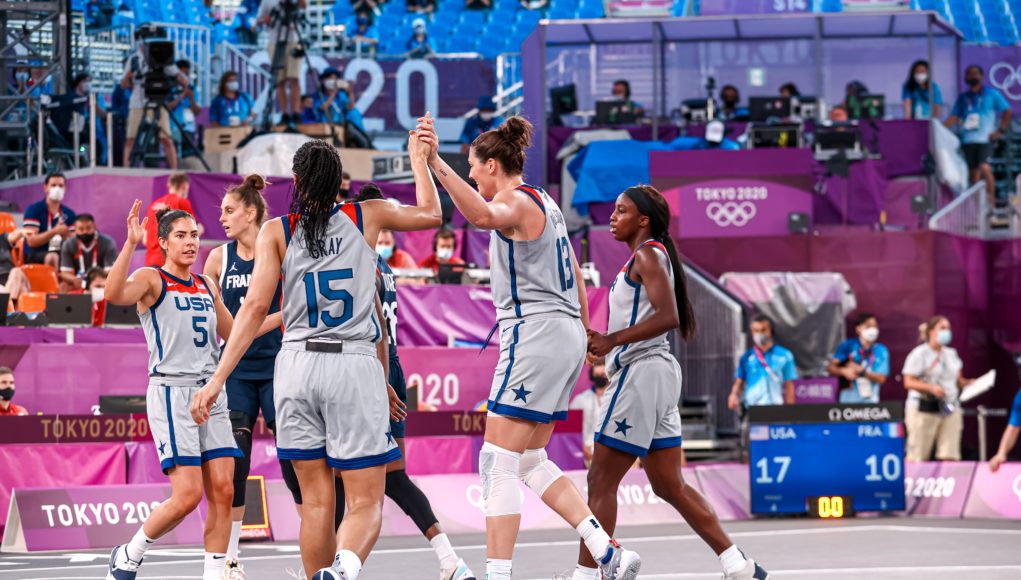 3×3 basketball made its Olympic debut on Saturday and it seems fans are loving it. If you’re new to these fast-paced matches that are sure to be a fan favorite in these Olympic Games, here are the rules:

Team USA’s women’s 3×3 team got off to a strong start with wins over France and Mongolia as the Americans got off to a 2-0 start. In case you missed it, here’s a recap of both games.

Team USA opened group play with a 17-10 win over France in their first game of the day at Aomi Urban Sports Park. Kelsey Plum (Las Vegas Aces) got the scoring started with a driving layup but the French used their length and size to disrupt the Americans early, forcing them to shoot from the perimeter.

After a timeout from the USA, they fed Stefanie Dolson (Chicago Sky) and fed her often, using France’s size against them. Dolson found the mismatches against France’s smaller guards and made them pay.

The USA closed the match on a 7-2 run in the final 3:52. Dolson led the Americans with seven points and Plum added six.

After the match, First Lady Dr. Jill Biden came down to congratulate the women, telling them they have a lot to be proud of and Dolson responded her just being there meant a lot to every athlete.

“What an honor and what an opportunity to play in front of the First Lady,” Plum said. “We are excited to get the win for her. We asked her to come back, so hopefully, she has time for us. I loved it. As soon as we walked out, we saw her in the stands. She waved and she brought all the energy, so we are grateful for that.”

In their final game of the day, the United States easily defeated Mongolia 21-9 to move to 2-0 in group play after their win over France earlier in the day.

The second game saw the Americans have a much easier time on the court and pretty much had their way with Mongolia. Allisha Gray (Dallas Wings) was on fire, leading the way with nine points, including four 2-pointers.

Plum and Dolson each paced the USA with six points apiece. With the USA leading 20-5, Mongolia made one final push, scoring four consecutive points before Dolson put an end to the game with 3:00 remaining.

“I think just getting more comfortable with each other really,” Dolson said. “They’re a tough team to play against defensively because they set a million screens. We’re not used to switching. I’m not used to being screened. So, I don’t think we were great defensively. But offensively, we’re just going to continue to work on spacing. These are the first few games that we’ve played with Jackie, so we’re just kind of finding that chemistry.”