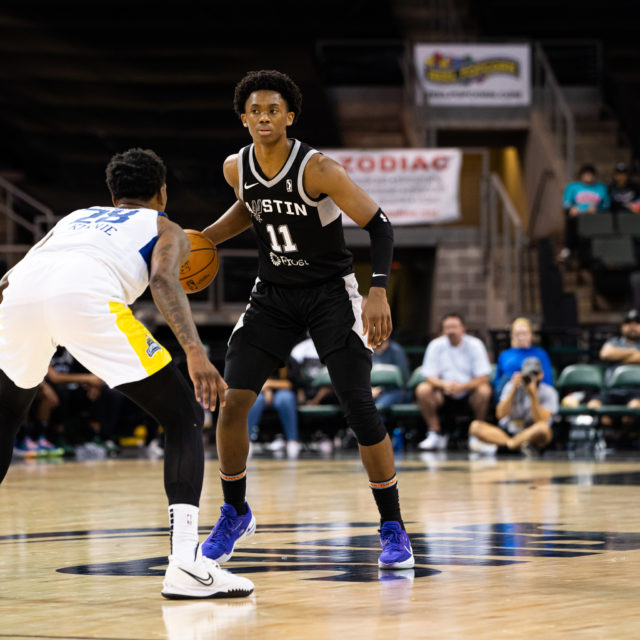 Big 3’s are as synonymous with San Antonio as Big Red and barbacoa. Up the road in Austin, a trio of San Antonio Spurs players shined with defense, ball movement, and effective shooting for the G League affiliate. In their home opener, the Austin Spurs (1-1) defeated the Mexico City Capitanes (2-3) 112-110.

Two-way contract players Joe Wieskamp and Devontae Cacock accounted for 44 points and 13 rebounds. They missed a total of nine shots between them. One of the big heroes of the night, however, was Joshua Primo.

Primo was on fire from the perimeter, hitting 5-of-7 from beyond the arc. They accounted for 15 of his game-high 28 points. The trio helped put down the clamps defensively against the Capitanes as they offensively surged back from a 15-point deficit. In the final frame, Austin outscored Mexico City 31-15.

“Just as good or better” was the response of Primo when asked what it was like to play in front of the Austin crowd at the HEB Center in Cedar Park after having now played both there as well as the AT&T Center in San San Antonio. “The fans were into it tonight. They’re always into it in San Antonio… They helped us a lot with this win, especially in the second half. They energized us.”

The Spurs had to hustle to close the scoring gap to be down just three points going into halftime. They struggled coming back out of the locker room, and the Spurs were outscored 42-31 in the third quarter. In the fourth quarter, however, their fortunes changed. With the majority of the 2,643 fans in attendance behind them, the team orchestrated the comeback.

“To have a crowd like that, and just to feel that energy from them, especially in the fourth quarter when we came back,” Wieskamp said after the game. “It’s a fun place to play, and I hope the crowd continues to show out for the rest of the season.” During the Showcase Cup that features back-to-back games against eight regional opponents going into late December, maintaining that advantage through the schedule is key.

For fans who attend games this season, the expectations for the entertainment on the court are parallel to what the San Antonio crowds have come to expect over the years. “Being a good defensive team, moving the ball on offense, playing at a fast pace, and getting everyone involved.” That’s how Wieskamp characterizes the style with which the Austin affiliate wants to play this season. For the most part, they’ve done that through just two games.

The three call-up eligible players for the San Antonio Spurs are getting it done tonight. Austin is in a tight one tied at 110 with 1:15 left in regulation. #PorVida #ForgedForTheFuture https://t.co/5m6HM7LQUl

In moving the ball, the Spurs rank seventh in the G League with 64.3 percent of their field goals coming off of an assist. Defensively the team ranks near the bottom in defensive rating. That number is impacted greatly by the 127 points allowed to the Rio Grande Valley Vipers in Austin’s first game of the Showcase. If the fourth quarter against the Captianes is a sign of what’s to come, expect the Spurs to quickly improve their standing.

As for pace, Austin ranks 10th in the G League at 103 possessions per game. “We’re figuring it out as we go,” Wieskamp remarked after the game. “It’s a long season, but I like the group of guys that we’ve got together here.”

What’s Next for the Austin Spurs?

On Thursday, November 18, Austin once again plays the Capitanes in the Showcase Cup schedule. When asked about the challenge of playing the same opponent so quickly, the team already knows what they need to button down for game two.

“For sure we need to focus on finishing plays on defense, making sure we get the rebound when we get a stop or force the miss,” Primo said following the game on Sunday. “On offense, I think we’ve been doing really well moving the ball, so I think we’re good on offense, we just need to tighten a couple of things up on defense and we’ll be fine.”

The Austin Spurs and Mexico City Capitanes tip-off at the HEB Center in Cedar Park is scheduled on Thursday for 7:30 p.m. CST. Tickets are available for the game here, and will be broadcast on ESPN+.