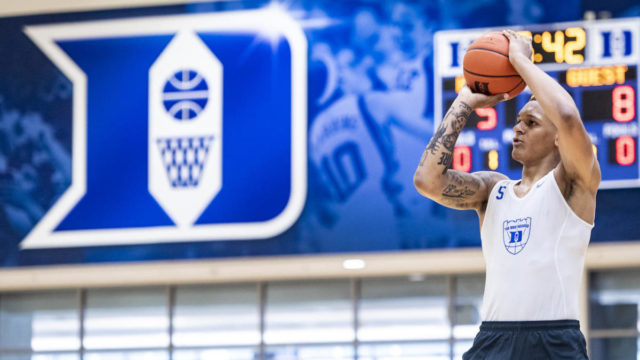 The San Antonio Spurs have had some wild swings in their games so far this season. That has led to some tanking talk early this year, but that’s not totally accurate as this team is giving full effort (most nights).

However, you can’t have a good slogan without some form of “tank” in it these days. And that brings us to Paolo Banchero out of Duke, who many teams would like to be tanking for this year.

The 6-foot-10, 250-pound forward does just about everything you love to see in today’s forwards. He can handle the ball — and often does for the Blue Devils — he can shoot it just about everywhere and is pretty much NBA-ready in his physicality. Here are his stats through only three games this season.

Banchero is a prototypical new-age power forward in that he can handle the ball, create his own shot, and shoot from all three levels. He’s gotten comparisons to Tobias Harris with how well he shoots, how strong he is, and how he can operate out of the low or middle post.

He can also guard across multiple positions when he is engaged and I have not seen him look lackadaisical on that end of the court yet.

The freshman Blue Devil drives well and strongly to the rim when he knows he has an advantage. He can just as easily play bully ball as he can finesse his way to the rim. However, one of the bigger knocks on him is that he is not really an above-the-rim finisher and isn’t terribly explosive. He does have great footwork and understands how to use his body to score though.

One of the other issues that has sprung up in this *very* early part of the season is Banchero’s reluctance to shoot threes. He hasn’t hit a whole lot, but he is capable of knocking those down.

He has to gain some confidence there and then his game will be pretty nearly complete. It’s pretty easy to see why he could be the top pick or second pick in the 2022 NBA Draft, especially as these big men “unicorns” become more of the norm throughout the league.